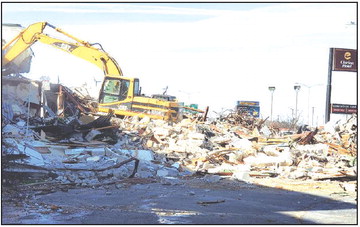 Like a Baptist preacher with his alliterative list of bullet points, West Memphis Mayor Marco McClendon rolled out a West Memphis Revitalization, Reinvestment and Redevelopment 2020 Plan.

City Council mulled it over twice and the proposal headed toward its final reading, set for the council’s next meeting on Thursday, Jan. 16.

“One of the main points of emphasis in our recently adopted growth and development plan (GROW 2040) is addressing blight and code enforcement,” said McClendon. “The West Memphis Community Development and Block Grant program has a long history of completing projects when warranted and when funding is available.”

The mayor attached his justification to the proposal and explained how it would all work.

The ordinance would create a baseline standard for housing in the city to correct slum and blight conditions especially for renters.

If not corrected landlords would get another 14 days to make corrections. Landlords are responsible for maintaining vacated properties.

Code enforcement fines start at $250 and may escalate to $1,000 for a series of violations.

The mayor said action must be taken because property values and rent revenue were adversely impacted by junk filled yards.

The city continued its practice of naming individuals rather than assigning responsibility to positions. City employees Paul Luker, Nick Coulter along, the current mayor Marco McClendon and citizen Steve Jones would be set to identify properties eligible for community block grant funding for repair, renovation or demolition.

Luker has long worked as Community Planning and Development Director. Coulter held down duties as Communication Director. The mayor has called Steve Jones his personal advisor and has steadily insisted Jones is not an employee of the city.

“We were able to get Oak Terrace Apartments and the Pig-ina- Poke buildings torn down and have possibilities with old gas stations,” said McClendon.

According to McClendon, his team was researching the feasibility of razing gas stations just east of Pancho’s on Broadway and another on the service road in front of Southland Casino Racing. McClendon also reminded city council they could tour passed property addresses with the team for consideration for condemnation.