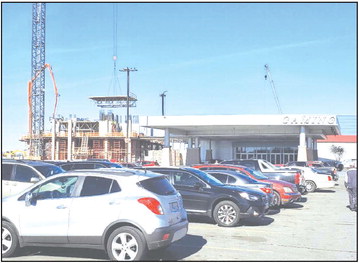 The record growth wasn’t limited to the private sector. The new West Memphis library was under way along with others municipal building developments by the P3 Group which included two new fire stations, one with a police substation and a new district court house.

City Planner Paul Luker has tallied more than 20 years experience with the city. He listed 87 commercial projects using the issued building permits. Investment in buildings reached an unprecedented $340 million in the city through the end of November 2019. The new year presented a strong beginning with the new city building projected investment at $20 million, plus park renovations valued at $10.85 million set to start in 2020.

“This is unquestionably the biggest year ever for West Memphis,” said Luker. The three biggest projects, Southland, Coca-Cola, and Carvana amounted to $320 million of the $340 million invested. The $20 million remainder would be a good year a lot of years.”

Luker said years when granaries expanded or relocated to West Memphis along the river, or when Baptist Crittenden Hospital was built showed as spikes in the value on city building permit charts, but nothing like this year with the trifecta from the three biggest projects.

“In terms of both capital investment and job creation 2019 represented a huge milestone for the city,” said Sorrell. “More than 800 new jobs will come to the city in the two biggest projects alone, Southland and Carvana.”

The Southland expansion for the new 20-story hotel, gaming space for sports betting and live table games along with more restaurants represented the lion’s share of the capital investment. The casino initially projected a $250.5 million pulling two building permits last year. Southland employs about 800 now and by the grand opening of the hotel tower and gaming floor is expected to add another 400 jobs.

Coca-Cola announced a $30 million expansion at its West Memphis bottling plant as part of consolidating operations from its Memphis plant. The project will add 65 jobs to the local economy.

Carvana began its $40 million construction of a new distribution center in the Mid-America Industrial Park with a building permit issued in August. Plans included building a 190,000-square-foot vehicle inspection center surrounded by paved storage for a more than 10,000-vehicle inventory. The company’s phase one employment plan targeted 400 to 450 new jobs, mostly for certified mechanics.

The state of Arkansas awarded three medical Marijuana dispensaries to West Memphis. No other city had more than one dispensary awarded. Delta Cannabis planned investing $1.687 million in its new building on the East Service Road.

And BaM Dispensary planned for spending $560,000 to remodel and upgrade an existing building at OK Street and East Broadway. No dollar amount was available for the third dispensary which pulled its permit in December against the building permit report through the end of November.

Other leading building investments in the city during 2019 included a shopping center, a hotel, a self storage facility and an apartment complex. The capital investment for the Ridge Apartment in the 200 block of West Jackson amounted to $1.7 million. Hamilton Self Storage at East Broadway and 21st Street planned a $450,000 renovation of an existing building.

A renovation in the Meadowbrook Shopping Center was projected to cost $3.2 million. A new hotel on the east service road planned spending $3.34 million to build.

Residential construction and remodeling amounted to $3.9 million in the city during 2019 according to building permit data.