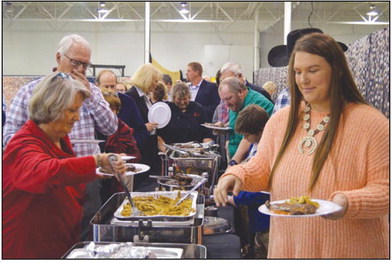 Longtime realtor was actively involved in the community

ralphhardin@gmail.com Just before the Thanksgiving holiday, one of Crittenden County’s longtime leading citizens passed away unexpectedly Richard Williford passed away peacefully at home on Monday, Nov. 25, at the age of 68. 2019.

Raised in West Helena, Williford moved to Crittenden County after graduating from from Mississippi State University in 1962 and became a Certified Public Accountant for the Dodge, Thomas and Goss Firm.

Later, in 1976 he then formed his own real estate agency, Williford Realty Company, Inc. It was in that capacity that he would be best known in business circles and in his work for the betterment of the community.

Williford served on the Mid-South Community College (now ASU Mid-South) Board of Directors, as well as on the Boards of Citizen’s National Bank and Helena National Bank. Richard was the Financial Raising Chairman for the Chickasaw Council, Boy Scouts of America for many years. He was awarded the Silver Beaver Award.

He was an avid sportsman and enjoyed bass fishing, duck hunting, participated in land conservation programs and was an Atlanta Braves fan. Richard loved his family, described as a loyal friend and a generous and true southern gentleman.

After word of his passing made the rounds in the community several people shared memories of working with Williford.

“I heard that Richard passed away this week, which reminded me, we never know the last moment in time when we will see a person again, said James Hudson, who spear-

West Memphis Christian School continued its 50th anniversary celebration recently with the WMCS annual auction. Black Knights past and present came together to celebrate and support the continuing legacy of the school. (More photos on Page 2) Black Knights Golden Anniversary

Photo courtesy of WMCS heads the Crittenden County Community Gardens program. “I had lunch with Richard and Don at the Shake Shack about three or four weeks ago. Richard was very kind to allow me access to as much land as I wanted to use and to build community gardens for the citizens of Marion and for citizens who lived in the surrounding communities.

Medel Marconi and Highway 77 were my primary garden locations, but he also granted me more property. Richard did not have to honor my request for properties to use but he did, and for our sakes, I’m grateful.”

Janice Gordon said, “He will always be remembered. He was and still is a wonderful and great man I pray God will bless his family with peace.”

“Mr. Williford was a wonderful man,” said Lori Nicholson. “He always greeted me with a warm smile and brightened my day. He was very encouraging and supportive to me and WMCS. He will be missed greatly.”

“A true loss to Crittenden County,” said D’James Rogers “Such a generous person. He gave me so much knowledge and wisdom. He will be truly missed.

“Very sad to hear of Mr.

Williford’s passing,” said Jason Collard, who shared a story. “I always enjoyed seeing Mr. Williford out in the community and catching up on how he was doing. I also ‘enjoyed’ him telling my kids (every time they were with me) during our visits, the same story of how I was practicing to be sanitation worker when I was three years old, walking around our house with the garbage can on my shoulder. My kids just loved hearing that story… I could always count on him to retell it.”

A graveside service for Williford was held on Friday, Nov. 29, at Crittenden Memorial Park in Marion.

Anyone interested in honoring Williford’s memory is invited to offer a memorial in his name to: