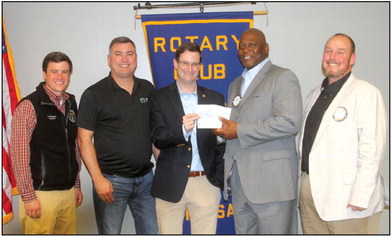 ralphhardin@gmail.com You can’t put a price tag on the value of reading, but you can put one on the cost of putting a book in a child’s hands from birth until he or she starts school.

And that is just what the members of the Marion and West Memphis Rotary Clubs have committed to do. During a joint luncheon Tuesday afternoon at Meadowbrook Country Club, Rotarians from both IMAGINATION

communities delivered funds totalling $7,000 ($5,000 from the West Memphis Rotary and $2,000 from their counterparts in Marion) to Mark O’Mell, exectutive director of Crossroads Coalition, to kick-start a Crittenden County branch of the Dolly Parton Imagination Library.

The Imagination Library is a book-gifting program that mails free, high-quality books to children from birth until they begin school, no matter their family’s income.

After launching in 1995, the program grew quickly. First books were only distributed to children living in Sevier County, Tennessee, where Dolly grew up. It became such a success that in 2000 a national replication effort was underway. By 2003, Dolly Parton’s Imagination Library had mailed one million books. It would prove to be the first of many millions of books sent to children around the world.

Dolly’s home state of Tennessee pledged to pursue statewide coverage in 2004 and global expansion was on the horizon. After the United States, the program launched in Canada in 2006 followed by the United Kingdom in 2007, Australia in 2013 and the Republic of Ireland in 2019.

Together, Dolly Parton and her book gifting organization have received honors and awards for their dedication to enriching the lives of children everywhere.

The Good Housekeeping Seal of Approval, Best Practices award from the Library of Congress Literacy Awards and recognition in Reading Psychology are just a few among a long list of the prestigious acknowledgments the program has received.

In addition to the many awards the organization has received, several milestones have been celebrated throughout the years. With each goal achieved a new one takes its place, creating an ever-growing and expanding organizational culture, much like that of Dolly’s always-keep-dreaming mindset.

“This is something that is going to be just an awesome thing for our local kids, some of whom might otherwise grow up in a house with no books in it,” said Marion Rotary President Pastor James Nichols of Marion First Baptist.

“It’s a great thing both of our organizations believe strongly in.”

“When a child has the opportunity to get a book in their hands, it makes so much of a difference in their early education,” said West Memphis Rotary Presiden Darin McCollum. “And what we’re committing to do here today is to be a part of that for the kids in our community. We’re committing to this investment for five years, and we hope to see it grow from there.”

With the initial $7,000 payment, the Rotary is helping to put books in the hands of hundreds of local children. Parents can go to www.imaginationlibrary.

com to register their child today.

“Thank you for your investment in your commmunity,” O’Mell told the Rotarians. “And thank you for investing in your