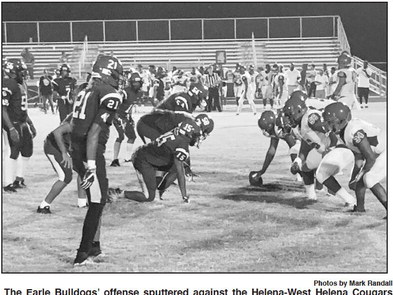 Earle looks to rebound after 20-8 loss

Earle’s defense kept them in the game, but an inexperienced offensive line and missed scoring opportunities resulted in a 20-8 Bulldogs loss in its home opener against the Helena- West Helena Cougars on Friday.

Head Coach Albert Coleman said the team needs some more work on offense, but was pleased with the defense which held a much bigger, more physical, and deeper team scoreless in the second half.

“Our defense did a heck of a job,” Coleman said.

“Our offense had some breakdowns that cost us some points. So we have some things we need to work on and fix. Our offense is going to have to put some points up on the board.”

After a scoreless first quarter, the Cougars got on the board first. Quarterback Clayton Dyer connected with Terell Jones on a 25 yard pass to make it 6-0 with 8:54 to play. The extra point attempt was bobbled on the snap.

Dyer tried to run it in for the two point conversion but was stopped.

Earle dug itself into a deeper hole after they were forced to punt with :33 seconds remaining in the half.

The punt was fumbled and recovered by the Cougars giving them a first and 10 on the Earle 15-yard line.

After punting on their first possession to start the third, Earle had a chance to cut the deficit, but turned the ball over on downs on the Cougar’s 14 yard line with 7:05 to play.

Earle got the ball back on an interception and had another prime chance to get on the board from the Cougar’s three-yard line.

The drive ended though when Quarterback Rholly Davis was sacked on 4thand- 3 on the ten-yard line.

“We had it in the red zone but just could not get it in,” Coleman said.

The Bulldogs defense held the Cougars scoreless in the second half and Earle avoided the shutout when Davis connected to Naz Allen with 3:36 to play in the fourth. Devin Johnson ran it in for the two-point conversion to make it 20-8 to avoid the shutout.

Coleman said Helena- West Helena is the toughest opponent the Bulldogs will face all season and could not fault the team’s effort.

“We’ve got some things to clean up,” Coleman said.

“But it is the first game of the season and they battled. And that’s all I asked them to do.”

Coleman said the focus of this week’s practice will be on beefing up the play of the offensive line.

After two years of having the same starting five, the Bulldogs only had one returning offensive lineman this year.

“They just have to gel and learn the system,” Coleman said. “Our quarterbacks took some punishment.

They got some pressure on us with the four man.

That’s just not supposed to happen.”

Coleman said both players bring different skills to the game.

“Rholly is a mobile guy,” Coleman said. “It gives us a whole different element.

Nick is a thinker. He sees things and can make the right play. They both made some good plays. We just need to put in some more work.”

Overall, Coleman gave the team a ‘C’ on its season opener.

“We’ll be watching film and breaking it down,” Coleman said. “We’re going to call them out though on their mistakes. Our goal is always to get better week-to-week. We will make some adjustments and go from there.”

Earle is on the road this week against Benton in Lexa.