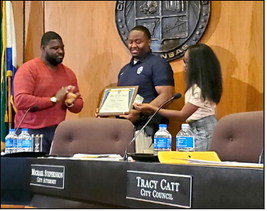 West Memphis police officer Roy Davis received recognition from WMPD Community Affairs director Tawana Butler and applause from West Memphis Mayor Marco Mc-Clendon for his life-saving efforts during a hotel fire in which he helped a woman in distress to safety. The accolades came during the Sept. 5 meeting of the West Memphis City Council. Davis also received a life-saving ribbon for his uniform during police ceremonies.