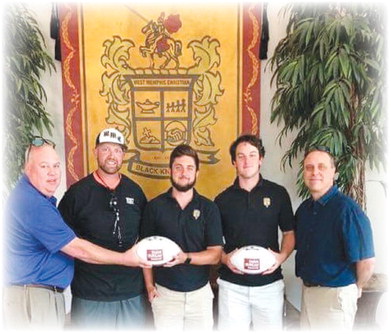 The Black Knights lost in a valiant effort for the second straight week this time to Calhoun Academy on the road at Pittsboro, Mississippi. West Memphis Christian School Head Football Coach Murry Rhodes was heartened by the tremendous effort of the eight-man squad in a battle of attrition. The teams stayed within one score until the very end when Calhoun Cougars pulled away to top WMCS by a final score of 50-38.

The Black Knights carry just nine players into game action. The starting eight played the whole game, both ways. Calhoun deployed its bigger roster and rotated players in for fresh legs with sprints to the edge for long gains. The Calhoun field dimensions were set for a standard 11man football and the wider field gave the speedier Cougars the edge on corner plays.

“The state doesn’t require you to change the field so we’ve been playing eightman football on an 11- man fields,” said Rhodes. “You have eight guys on a field where you can get around the edge. It makes it really hard to stop a fast team. We are not fast but we are big and physical.”

Rhodes may change the WMCS home gridiron to 8-man standards to play to the strength of his Black Knights.

“The 8-man option is to change the field down to 40 yards width and 80-yardlong,” said Rhodes. “Nobody does that because the championship games are played on a regular field.”

The 15 year head coach in his first season with WMCS was heartened by the efforts of the Black Knights squad.

“Our players played every snap,” said Rhodes. “The courage and heart these guys have shown the last two weeks has been amazing. It’s really encouraged me in my season of coaching. This season has been a good story of perseverance. These players did not even know if they’d have a team this year. What a life lesson they are learning here.

Tough stuff is going to happen.”

The coach noted Black Knights highlights against the Cougars. The team had two rushers over the century mark.

Mathew Land had the rest of our carries and had 100 yards rushing. Receiver Tyler Casper, a senior had a long catch for 60 yards and was our leading receiver.

He had a TD also. Another senior, Sam Ritter, had a bunch of tackles, a one man show. Daniel Rivera, isn’t on the stat line but he weighs about 270 and was a force blocking for Ryan and Mathew. He makes it where our guys get going.

He is solid in the interior.”

The coach summed up the outing.

“We just ran out of gas,” said Rhodes. “They had 18 players and they’d put in fresh players while we had to just stay out there. It caught up to us at the end of the night.”