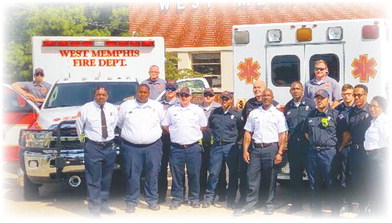 The city suffered through high turnover and critically low staffing, as Brewer, along with EMS Division Chief Derrick Clay, developed innovations to shore up the beleaguered ranks.

Clay wrote a plan to pay college tuition for aspiring paramedics in exchange for a two-year employment agreement. City council voted raises for competitive wages and compensation for city workers effective July 1 and the paramedics garnered the biggest percentage increase. The three remedies served to attract certified paramedics to fully staff three service units for the first time in the history of the fire department.

The WMFD has a long history of providing ambulance services to its citizens, dating back to 1980, when ambulances were first placed in city fire stations.

“The men and women of the West Memphis Fire Department are excited to add another level of service for the residents and visitors to our city,” said Brewer.

All West Memphis firefighters maintain EMT certificates which helped the department to its elite ISO One rating. The paramedic staffing delivers higher level medical response, The EMS Division chief touted the high level coverage and pointed to the end benefits for city residents.

“By adding a third unit in the area, we will save precious time in the response to treatment of critically ill patients.” said EMS Chief Clay.