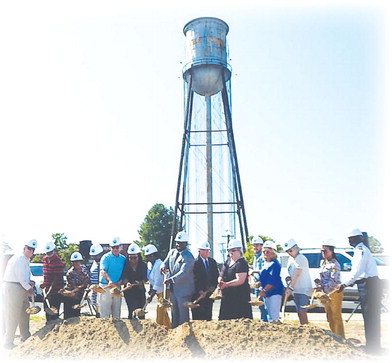 Facility will serve as hub for redevelopment of East Broadway district

The mayor evoked his social media hashtag, saying the new development proved the city remains on a “winning streak.” Mc-Clendon told 75 onlookers the library and research center represented the first step to revitalization on Broadway — a step whose roots go back 20 years to the early days of the Mayor Bill Johnson administration.

The library development has been mostly funded by the library tax accumulated over the last generation.

“This day is significant as it starts a new chapter in our city,” said McClendon.

“This dream went from an ideal into a plan we could achieve. It meets the needs for our community and meets the expectations of the library board. The plan was halted because of funding.”

The 14,000 square foot facility had been on the drawing board for three years. One site was rejected after a first round environmental study. The final site was set for the north side of Broadway on the 500 block. Buildings were razed in the spring and a sandlot stood ready for development. The library had fallen short of the $4.5 million construction plan and the city is now set to kick in $1.4 million on a bank note to see it through. “After much conversation, City Treasurer Frank Martin secured funding with my blessing and city council approved that measure,” said McClendon.

The mayor set the perspective as he stood in the shadow of the city’s remodeled landmark, Watershed.

“The facility will serve as the first anchor as we revitalize Broadway,” said McClendon. “As the light from the water tower reflects on this beautiful new structure to come, it will serve as a sign of many more great things to happen for our city. The future is bright.”

The city planned to light up Broadway in a separate $20 million package. The city aimed to build two new fire stations near each end of Broadway. One fire house would also be the site for a police substation.

Environmental studies were undertaken for a new municipal courthouse on the city’s main street, two blocks west of the new library. The school district also intends to build its new Wonder Junior High on Broadway should it pass the Sept. 10 millage vote.

The new library is just the latest addition to a growing list of new development in West Memphis, including the $250 million Southland Casino and Racing expansion and a multimillion- dollar expansion at the city’s Coca-Cola bottling plant, all part of the city’s long-term growth and development plan, GROW 2040.

Librarian Rebecca Bledsoe Johnson told the crowd of 75 gathered for the groundbreaking.

The new library would double the space of the 7,000 square feet at the existing library. She was overwhelmed when she announced a meeting room in the new innovation and technology center would be named for the late library board chairman Murphy Smith, the driving force in delivering the project to the starting line.

“I’m thrilled about the Murphy Smith meeting room,” said Bledsoe. “He was instrumental in bringing this library to come to pass. We miss him terribly.”

Bledsoe pined over the existing library.

“I love our little library that we have,” said Bledsoe. “It’s a little brown box. I remember back in the mid-seventies when the newest part opened. I was about 8 years old. I was excited to go to the library.

The library had its time.”

Other amenities in the design plan for the new building included a coffee bar and a copy center.