‘This is a vote for our students’ 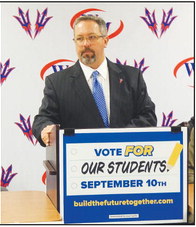 City, school leaders rally to get the vote out

A standing-room-only crowd jam packed the West Memphis School Board room on Monday, the day before classes started back for the 2019-2020 school year.

The school district kicked off its campaign to increase the millage and qualify for a $22.4 million in matching state partnership funds.

Superintendent Jon Collins kicked off the announcement that featured the architects for the two new junior high schools expected to be built should voters affirm the increase.

State Senator Keith Ingram offered insightful political analysis along with a brief history of the school district. In contrast, Mayor Marco McClendon presented an enthusiastic hope for the future.

“Today brings a great day for the West Memphis School District as well for the City of West Memphis,” said Collins.

“Six years ago, we set to plan and rebuild our entire school district, to renovate and upgrade all our campuses. It included six elementary schools, three junior high schools and our high school. I’m proud to say as of today we have invested over $64 million modernizing the academic environment for our kids and the educators that serve them.”

Collins pointed to the high stakes election for the school district and declared his intentions.

“Many people know that the West Memphis School District was approved for $22.4 million for the largest partnership funding in the 2019 round of awards for the state of Arkansas Academic Facilities Division,” said Collins. “It is our intention to build two brand new state of the art junior high schools to finalize phase three of our three phase master facilities plan. These two junior highs will be around 110,000 square feet each, emphasizing modern core academics spaces as well as enhanced safety measures and will serve approximately 635 children each.

Collins said what benefited the school district would also improve the city.

“Not only will they compliment our mayor’s economic development vision and his GROW 2040 plan, it will provide great anchors our entire community can be proud of,” said Collins.

Collins said the school district stood at a crossroads and urged voter to vote yes next month and “build the future together.” “We are in the midst of a potentially great moment for West Memphis,” said Collins. “To assist with state partnership funding we must secure an additional

funding to support our matching responsibilities or will be required to send back Little Rock the investment the state has given to West Memphis, so that it can be given to a district that will invest and support facilities. As superintendent I ask you to go to the polls September 10 to vote for our students and make a positive difference investing in the community we all call home.”

State Senator Keith Ingram pointed to foundations built by fiscal restraint during both previous Superintendent Kessinger and city Mayor Johnson administrations as key to public building projects on the drawing board.

He told voters the upcoming election was a use it or loose it proposition.

“Think about a millage that has not increased since 1953, since the year before I was born,” said Ingram.

“There is no city creating jobs that does not have a strong school system. This superintendent and school board have chartered a course to make our schools the finest in the state.”

Ingram told voters not to take it for granted that some one else would cast the winning vote.

This is our one shot. This is our time to give our children the opportunity they deserve.”

Mayor Marco McClendon, in the midst of a leading a municipal campaign to spend $20 million on new city buildings, optimistically pointed toward the future as he noted his former teachers and principles attending the rally.

“I support this millage,” said McClendon. “We cannot allow past failures to stop the progress for our students. In order to improve the quality of life in West Memphis, we have to invest in education. Our teachers and students deserve state of the art educational facilities that are conducive to teaching and learning. We cannot allow this opportunity to pass us by. If you truly believe our children are the future, we have to come together to do what is right for West Memphis. We can never go wrong investing in the minds of our young people.”

Early voting begins at the county courthouse a week early on Tuesday, September 3.