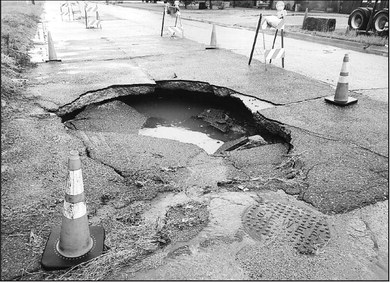 South side residents and local truckers in West Memphis have lately found themselves negotiating some big sinkholes in city streets as they’ve driven around town.

A series of sinkholes, almost in a straight line eastto- west, have opened up.

The utility department put up barricades around each one and closed a portion of Woods Street to through traffic until the holes can be fixed. Holes were marked at Woods and Jefferson, South 7th Street and Jefferson, and one on West Walnut in the neighborhood near Faulk Elementary.

Utilities General Manager Todd Pedersen announced plans to repair the big holes during the August Utility Commission meeting. The sinkholes aren’t the California variety that open up from earthquake activity.

Instead the local problem generally starts with holes in old sewer pipes which create a vacuum sucking in surrounding soil. Pedersen said there was more to it with these sink holes and it has been impossible to address with the high groundwater table so far this year.

“These are major sink holes around deep lines that we have not been able to get to them because the ground water has been so high this year,” said Pedersen.

Ground water has fallen to eight feet as the Mississippi River flooding receded this summer. The river remained above flood stage a record number of days this year. The lower ground water most recently reported opened up opportunities to undertake repairs.

“The manhole at Woods and Jefferson sank due to the high groundwater was from the Mississippi River this year,’ said Pedersen.

“We called in a company to do soil borings at Woods and Jefferson to see what it will take to repair because we fixed it just seven years ago and it sank again.”

Pedersen expected the repair recommendation to include a support structure for the deeply buried sewer pipeline.

“We will see what the geo-tech says it will take to keep that thing in place,” said Pedersen. “We will have to spread it out or do pilings under the manhole, and that manhole is located right outside one of our major pump stations.

Commissioners heard the utility was on a fast track to repair the holes now that the ground water was receding.

“Next week we will put out a bid package for those three projects because they will be major projects, especially the one at Woods and Jefferson,” Pedersen told commissioners. “So we will be asking for your approval in September and then get started.”