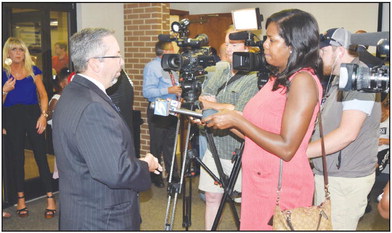 The WMSD held a press conference on Monday inside its administrative office as a springboard to the campaign that will allow the district to build two new junior high schools.

The state has contributed funds totaling $22.4 million, which is contingent on the City of West Memphis voting for the millage. West Memphis’ single mill value is approximately $333,320, which is significantly lower than, for example, Jonesboro (616,150) and Russellville (938,337).

The 7.5 mill increase will move the WMSD from the current 29 millage rate, which is third lowest in Arkansas out of 235 districts, to a 36.5 millage rate.

The average millage rate for Arkansas is 38.36.

If citizens vote down the millage, the school district would have to return the $22.4 million to the state.

Superintendent Jon Collins hosted the press conference, which was attended by Memphis TV stations WMC-TV, WPTY-TV and WHBQ-TV. After addressing the media, Collins turned over comments to state senator Keith Ingram and mayor Marco McClendon, both of whom extolled the virtues of voting for the millage.

“This project is one that has been in the making for a number of years,” said Ingram. “This school district has used its dollars wisely over the years. It’s reached the point where we’ve been given a chance at $22.4 million from the state, and it’s only going to be a one-time deal. We don’t get a second bite at this apple. Not having a millage since 1953 has just been remarkable.

“We’ve got great teachers, great curriculum. We need to have world-class facilities for our students. We not only want to give our students the best education possible, but also in the best environment possible.”

The WMSD was among 40 school districts awarded state academic partnership funds for construction, expansion and HVAC system replacements. Furthermore, the district’s $22.4 million was the largest award in Arkansas.

The building project will be to construct brand new Wonder and West junior highs, what with the phasing out of East Junior High in the next few years.

The projected cost of each new campus from start to finish is approximately $26 million for each building.

McClendon said the millage vote is critical not only for the school district, but for the community as well.

“In order to improve the quality of life in West Memphis, we must invest in the education of our kids,” he said. “Our teachers and our students deserve quality educational facilities that are conducive to teaching and learning. We cannot allow this opportunity to pass us by. If you truly believe in our children and our future, on Sept. 10 you will vote ‘yes.’”