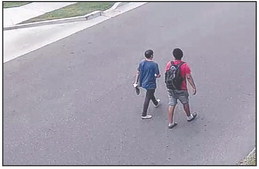 Two West Memphis juveniles, ages 13 and 14, have been arrested and charged with residential burglary and theft of property for a string of recent break-ins in West Memphis, according to Assistant Police Chief Robert Langston.

On Tuesday, July 30, at approximately 3:55 p.m., officers responded to a resident at 307 Roosevelt Ave., who said that her home had been burglarized. Officers noticed the back bedroom window had been broken using two bricks that were found on the ground.

Langston also said officers also noticed other rooms in the home that had been vandalized. On the couch, officers also noticed a television had been removed from the mantle in the living room. Fingerprints were lifted from the scene. Items stolen included a Sony Playstation with approximately four video games; a Microsoft Xbox and 10 games; an Apple watch and a laptop computer, all valued at approximately $2,600.

On that same day officers were dispatched to 308 W.

Barton Ave., where two witnesses told officers they saw two subjects walking from the back yard at 307 Roosevelt, and saw that they were in possession of

The witnesses also said the two suspects kept walking toward Bragg Elementary, where there are two Skycop cameras.

A third burglary was reported by a resident at 307 W. Cooper, where intruders broke into a window on the north side of the house.

The resident said the home was vandalized and the only thing stolen was a maroon mountain bicycle.

Detectives assigned to the case gathered enough information to obtain arrest warrants and on Tuesday, Aug. 6 detectives located and made contact with one of the juveniles on North Avalon. The juvenile was read his juvenile Miranda rights, charged with theft of property and burglary and then transported to the Juvenile Detention Center. The next day, Wednesday, Aug. 7, detectives received information as to the whereabouts of the second juvenile suspect.

Upon arriving at a location on Balfour detectives were able to take the juvenile into custody and also charge him with burglary and theft of property.