WMSD asking public to ‘build the future together’ 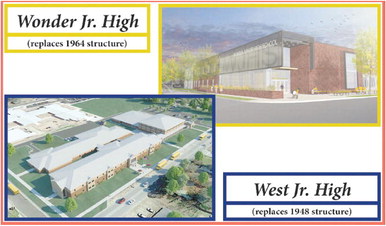 With the Sept. 10 millage vote on the horizon, the school district is charging ahead with a campaign to gain public support on the construction of two new junior high schools.

On Tuesday, superintendent Jon Collins met with school and community leaders as the WMSD begins its campaign for the millage vote.

The two new prospective junior high schools will be West and Wonder, with the phasing out of East Junior High. In April, the WMSD was among 40 schools in Arkansas awarded state academic partnership funds for construction, expansion and HVAC system replacement projects in the coming 2019-2020 fiscal year.

West Memphis was approved for the largest award in Arkansas — $22.4 million — to assist with the new construction of the two state-of-the-art junior high schools. A total of $11.2 million each will go toward Wonder and West.

“West Memphians have the chance on Sept. 10 to think about the future of our community and the future of their own children,” said Mayor Marco McClendon. “This is what we need. We’re on a winning streak in West Memphis. We are improving the quality of life here in this town and what better way to support our future than getting out to vote yes on Sept. 10.”

The projected cost of each new campus is approximately $26. When you subtract the state share of $11.2 million from the projected $26 million it leaves the district share cost of $14.8 million each. This means the WMSD must fund $29.6 million of the construction cost.

The Sept. 10 vote will ask West Memphis residents for a 7.5 mill increase. This is the first time since 1953 that the district has asked for a voter increase in the local millage rate.

The increase will move the WMSD from the current 29 millage rate (which is third lowest in Arkansas out of 235 school districts) to a 36.5 millage rate.

On Sept. 10, West Memphis voters will decide on a millage to support planned construction of two new multimillion-doll junior high schools for the city. If approved, funds generated will be added as matching funds for a $22.4 million grant awarded to the district.

increase…we have to do this for our kids, for our future,” said Carolyn Mills, a West Memphis High grad whose children graduated here locally and who now has grandchildren in the WMSD.

“The way 1 look at it is this is our best chance to make our children better and to make our school environment better. In order to do that we’ve got to get out and vote on Sept. 10.”

The building project is Phase 3 of a three-phase program that Collins introduced soon after he was hired as superintendent in 2013.

to seven other schools in the district.

“We've been very fortunate over the years to have a very fiscally responsible administration,” said West Memphis City Treasurer Frank Martin. “Now it’s time to step up and improve the great schools we already have.”

“When you take how we’re going to rezone, going from three junior highs down to two, essentially every child who comes through our district will be funneled through both of those junior highs,” said Collins. “They will be state-of-the-art facilities with both being 110,000 square feet each and will service about 635 kids. I think this fits right in with the mayor’s economic development package of growing West Memphis, particularly on the east end of Broadway. It will also tie in with the beautification of our city as well as another driver for economic development.”