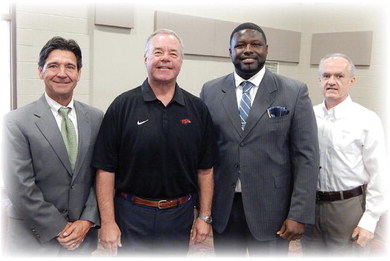 Planners employed a participation process including a cross-section of city stakeholder with local residents, businesses, the school district and the college in developing a plan during the last year to move West Memphis forward.

The group identified and named a handful of key areas and a corresponding “wish list” for improvements in each zone for city planners and private developers to pursue over the next 20 years. The announcement last week signaled the GROW 2040 plan’s readiness for city council final approval.

The focus group met five times, beginning in July 2018, to shape the city plan. The group worked first to discover basic facts about the city and found a city in decline. The next task was to set a direction for the city. Growth and development consultant Bob Barber gave his final report to city officials and focus group members regarding the heading of the city under the new plan.

“The city, because of its unique position, needs to leverage its road, river and rail infrastructure to be a serious contender for growth in the future,” said Barber, who served as team leader for the development process. “The number one word that emerged to describe West Memphis was ‘potential.’ There is a community life cycle. The city went through the Wonder City Era and it’s time for another rebirth. What you’ve done is you’ve created an intervention point called Grow 2040. I can almost guarantee you, if the interventions of this plan are implemented you, will see real change in your community over time.”

The focus group worked out design features for the city under five development zones. The “Uptown District” was mapped across the city north of Interstate 40 and includes the two latest big developments in the city — the new Baptist Memorial Hospital massive expansion now underway at Southland Casino Racing. Those developments were envisioned to anchor a growth spurt that would include new restaurants, hotels and tourist attractions. New amenities at Tilden Rodgers Park and a new fire station near Broadway and College Boulevard serve to compliment the facilities at ASU Mid-South College in an area the study group dubbed the “College/ Park District.” The focus group saw redevelopment opportunities for mixeduse buildings an new in-fill along Broadway. The corner by Pancho’s was seen as an intersection for and cycling, tourism, loftstyled housing, and industrial development on South Loop Road.

State Senator Keith Ingram keyed in on the cycle tourism and noted the plans to revitalize the bayou trail through the city. He said parks and trails delivered an appealing lifestyle to prospective city residents and businesses.

“No community grows without a plan,” said Ingram. “The Big River Trail and the Eco-Park and all these things really come together. All these things are really going to take off and help us connect together for an attractive quality of life.”

The meeting served as a stakeholders celebration as participants gathered to hear the final results.

“Those are the seeds,” said Luker. “We’re already working on these things.”

Mayor Marco McClendon said the new plan was further evidence of the “winning streak” mentality West Memphis has adopted. He called for improvements in sanitation department performance to clean up the town and said serious crime was in decline. He urged city council to adopt the Grow 2040 plan with a biblical appeal.

“I truly believe without vision, our people shall parish,” said McClendon.

“Grow 2040 is our vision of what West Memphis can become.”

The mayor touted new businesses in the early process committing to a new location in the city, and the hundreds of expected jobs paying much higher than average local wages. The mayor noted the renovation and rebuilding of every West Memphis Public School and the great education and training opportunities at the college. Mc-Clendon saw health care as key to attract growth and the new hospital and the medical mile extending to East Arkansas Family Health Center as a quality of life magnets. According to the mayor, the triple play infrastructure of road, river and rail positioned West Memphis for more new industrial prospects.

McClendon made a final appeal to city council members at the lunch to adopt the Grow 2040 plan.

“We can do this… together,” concluded McClendon.