WMPD looking for vehicle that may have struck woman 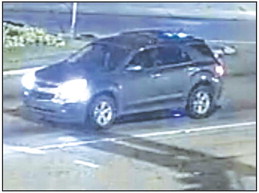 West Memphis police have released a photo of a vehicle they believe may be connected to an incident on July 4 that led to the death of a local woman.

The West Memphis Police Department is still investigating the circumstances surrounding events in which 33-year-old Nyshida Johnson sustained serious injuries which ultimately led to her death.

Johnson was found at the intersection of Broadway and 11th Street around 11:30 p.m. last Thursday night. She was taken to the Regional Medical Center in Memphis where she later died from her injuries. The cause of those injuries is the crux of the investigation, as detectives originally said they were trying to determine if she fell from, was pushed from or was struck by a vehicle.

On Monday, the WMPD released a photo of a Chevy Equinox they bellieve may have run over Johnson. So far, police have not been able to locate any witnesses to the incident.