The future is bright for rebuilding Grizzlies 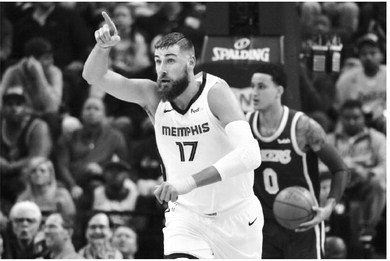 Special to the Times Marc who?

Now there’s something I never thought I would hear myself saying. As long as I have been following the Memphis Grizzlies, Marc Gasol was always my favorite player. Naturally, I was sad to see him go when the team traded him to the Toronto Raptors for a bunch of players I had never heard of.

Turns out it the deal worked out for both sides.

Gasol won a championship with the Raptors and while the Grizz suffered through another losing season, I gained a new favorite player in Jonas Valanciunas. I will be honest. I had never heard of the guy before. But I quickly became a fan of Jonas after watching him consistently record double-double after double-double. In his 19 games with the Grizz at the tail end of the season, Valanciunas averaged nearly 20 points and 10 rebounds a game. Not bad for a guy who didn’t register on my radar. It sure took some of the sting away from losing Marc Gasol.

The Grizz front office is on a roll lately. Not only did the Grizz get Ja Morant in the second round of the draft, they also scored Brandon Clarke with their other pick. I think Clarke could end up being the biggest steal of the draft.

Those are some nice building blocks for a team in rebuild mode.

Now the suits gave me more reason to be optimistic. After opting out of his $17 million contract for next season, Valanciunas resigned with the Grizzlies this week for $45 million over three years. If you ask me, that’s a bargain. I don’t think Grizz fans knew that we were getting one of the best centers in the league.

The seven footer was a workhorse who used his size to score and was fearless in the paint. He might not be the best defender, but that’s what your teammates are for. He has good passing skills and was one of the strongest rebounders on the team.

I am very pleased with this signing. Valanciunas is only 27 years-old and is a quality starter who is approaching the prime of his career. It’s a team friendly deal too. Believe it or not, next year he will be the highest paid player on the team at a whopping $15 million. That’s a better value than $25 million for Chandler Parsons.

I’d say the trade worked out very well for the Grizzlies. Fans should be very excited to have a veteran presence like Jonas to go along with Jaren Jackson Jr., Morant, and Clarke.

We may never see ‘Grit and Grind’ again. But if the new front office execs keep making trades like this and good draft picks, I think Grizz fans have a lot to look forward to. While I am not predicting an appearance this year in the playoffs, if this new young core matures into what we think it will, fans will be waving growl towels again soon and saying Marc Who? Mike Who? As for me, I’m excited for three more years of Jonas.