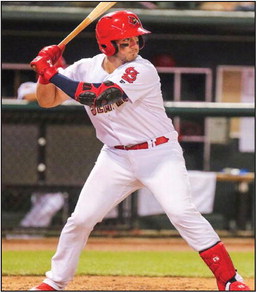 Memphis closes out first half in cellar of PCL American Division

Memphis Redbirds Media It has been a rough first half of the season for the Memphis Redbirds. The St. Louis Cardinals AAA franchise finished the first three months of the season in last place in the Pacific Coast League’s American Northern Division with a 36-54 record.

There have been some bright spots in the Redbirds’ season, though, and there’s still plenty of baseball to be played this summer after the All-Star Break.

But Memphis had little luck in the final weekend of the first half, dropping three of four games in a holiday weekend series on the road in Iowa.

Justin Williams’ pair of two-run home runs were not enough Thursday night, as the Iowa Cubs (Cubs) scored twice in the bottom of the ninth to walk off the Memphis Redbirds 5-4 in the series opener in Des Moines, Iowa.

Memphis trailed 3-0 after three innings before Williams blasted his tworun bombs in the fourth and sixth innings to give the club the lead. The Redbirds kept the 4-3 lead until the bottom of the ninth, when Iowa scored twice thanks to a pair of errors and a play-not-made at the plate.

John Nogowski also had two hits in the game to go along with Williams’ outing. He now has a hit in three-straight games and 18 of his last 19 with a plate appearance.

Mike Hauschild started for the Redbirds and pitched 5.0 innings, giving up three runs on six hits.

He gave way to Hunter Cervenka and Jesus Cruz, who fired 3.0 scoreless innings of relief.

Leading 4-3, Chris Beck came on in the bottom of the ninth and saw Jacob Hannemann reach on an error to start the inning.

Hannemann stole second and went to third on a throwing error, and he then crossed the plate as the tying run when Edmundo Sosa fielded a ground ball and tried to throw him out at the plate but was late.

Phillips Evans then singled home the winning run for the Cubs.

An early slugfest left the game tied at 7 after three innings, and the Cubs scored twice in the bottom of the eighth to lock up a 9-8 win over the Memphis Redbirds Friday night.

Memphis scored six times in the top of the second to open a 7-2 lead, highlighted by an Edmundo Sosa grand slam. Iowa came right back and scored three times in the home-half and then twice more in the bottom of the third to deadlock the game at 7 heading to the fourth.

The Redbirds scored a goahead run in the top of the sixth with Randy Arozarena doubling home Chris Chinea. Arozarena now has a hit in nine-straight starts.

Memphis kept its 8-7 lead until the bottom of the eighth, when the Cubs scored twice off Chris Ellis on a pair of singles.

John Nogowski singled with one out in the top of the ninth to become the tying run, but he was stranded as the last two Redbirds of the game struck out.

Nogowski has hits in 19 of his last 20 games with a plate appearance.

Adolis Garcia, Andrew Knizner, and Lane Thomas all had two-hit games for the Redbirds to go along with Sosa’s four RBI performance.

Mike Mayers made an injury rehab appearance in relief for the Redbirds, walking two in 0.2 innings. Memphis did turn their fortunes on Saturday. A four-run fourth inning gave the Redbirds a 5-1 cushion over the Cubs (Cubs), and four scoreless innings by the bullpen to finish the game secured a 5-4 win for the Redbirds on the road.

Lane Thomas and starting pitcher Harold Arauz drove in single runs with their knocks, and Randy Arozarena plated two with his single to center field.

After giving up the run in the first inning, Arauz faced the minimum in the second, third, and fourth innings to help the Redbirds keep the 5-1 lead into the bottom of the fifth before Iowa scored three times to get within a run.

Taking the ball from Arauz in the sixth, the Memphis bullpen locked down to secure the victory.

Mike Mayers tossed the sixth inning as part of his injury rehab assignment and allowed a two-out double, but he struck out the final batter of the inning.

Chasen Shreve worked a perfect seventh inning, and he gave way to Ryan Helsley. Helsley promptly struck out the side in the eighth and got two strikeouts and a groundout in the ninth to wrap up the win and pick up his first save of the season.

Thanks to his double and a walk, Lopez has reached base in 11-straight games.

The win ended Memphis’ three-game losing streak, but the Cubs used a fiverun fourth inning to take a 7-3 lead over the Memphis Redbirds and closed out the series finale Sunday afternoon with an 8-5 victory.

Memphis led 3-2 after an inning-and-a-half, thanks to a Jose Martinez threerun home run, which was his first-career Triple-A hit. But the Cubs (52-38) scored five times in the bottom of the fourth and chased Memphis starter Genesis Cabrera from the game, which opened a 7-3 lead.

Randy Arozarena singled home a run in the fifth and John Nogowski had an RBI groundout in the eighth to account for the rest of Memphis’ scoring on the day.

Arozarena has a hit in each of his last 11 starts and has driven in a run in three-straight and six runs in his last four games started.

Irving Lopez was 1-for-2 with a walk and two runs scored, and he has now reached base in 12-straight games and drawn a walk in three-straight.

After Cabrera left the game in the fourth, five Redbirds relievers combined to finish the game and allowed just one Iowa run.

Memphis pitching struck out 12 Cubs on the day.

After the All-Star Break ends Wednesday, Memphis returns to AutoZone Park on Thursday to host the Oklahoma City Dodgers (Dodgers) in a four-game series through next Sunday.

• Thursday, July 11 at 7:05 p.m.: Throwback Thursday presented by Polk’s Meat Products featuring the Redbirds suiting up as the Memphis Chicks and throwback concession pricing of $2 beers and $1 Polk’s hot dogs; College Night with $5 Bluff tickets for college students with a college ID

• Saturday, July 13 at 6:35 p.m.: Terminix Saturday Fireworks Show after the game; Aldo’s Pizza specialty ticket with free soda at the ballpark and free and discounted food and beverage at Aldo’s Pizza Pies available at www.memphisredbirds. com/aldos