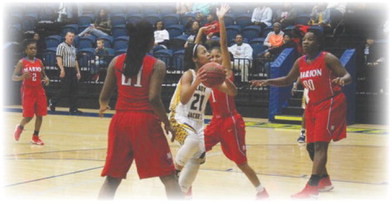 The Lady Greyhounds have added transfer guard Tyler Hitchcock, signing her to an NJCAA Letter of Intent and Scholarship Agreement for the 2019-20 season.

The 5’6” guard redshirted last season at Cisco College (Texas) after averaging 16 points, 5 rebounds, 3 assists and 2 steals per game in her final season for Wynne Head Coach Bobby Harris, earning All-Conference honors. The 3-year varsity letterman then headed to Texas before deciding to transfer closer to home. She has four years of eligibility remaining including two years at ASU Mid-South.

Before beginning college, Hitchcock was a standout with the Wynne Yellowjackets, playing basketball and softball. She graduated from Wynne High School in 2018.

Hitchcock is the Lady Greyhounds sixth signee this spring as the program looks to rebound from last year’s short season that ended after the fall semester due to a lack of eligible players.

Since May, the Lady Greyhounds have signed a number of players, including Kaylan Larry from Parkview High School in Little Rock The 5’4” guard was a 4-year varsity letterman and led the Patriots in scoring with 16.1 points while pulling down 3.9 rebounds, dishing out 2 assists, and collecting 2.9 steals per game as a senior. She was named All-Conference and earned State Farm Player of the Game honors three times, including a high game of 38 points for Head Coach Lahoma Howard.

“I look forward to adding high-character student-athletes who understand and want the opportunity to commit to being collegiate basketball players and ‘building bricks’ for the future of our program,” Corona said at the time.

The Lady Greyhounds have also added Springdale guard Ashley Pegue for the 2019-20 season as she signed a National Letter of Intent and Scholarship Agreement in a ceremony at the Springdale High School gymnasium just a few days after her high school graduation.

The 5’8” 3-year letterman averaged 3.6 points and 3.6 rebounds for Head Coach Heather Hunsucker as the Lady Bulldogs went to the state tournament all three years.

After signing Pegue from Springdale, Coach Corona also targeted one of her teammates. The Greyhounds have added fellow 2018 graduate Jaquita Caldwell.

The 5’7” 3-year letterman was a defensive specialist for Head Coach Heather Hunsucker, taking 12 charges and averaing a block a game as the Lady Bulldogs went to the state tournament all three years.

The 5’7” guard/forward for Head Coach Melissa Young was a 4-year varsity letterman and averaged 11 points, 8.5 rebounds, and 1.8 steals per game as a senior, earning All-Conference honors. And rounding out the new recruits, the Lady Greyhounds announced the signing of Jerrisha Rice from Belton High School in Belton, Texas, to an NJCAA Letter of Intent and Scholarship Agreement for the 2019-20 season.

The 5’8” forward was a 2-year varsity letterman for Head Coach Brenda Gomez and averaged 5 points, 5 rebounds, and 3assists, and 1 steal per game as a senior, earning Academic All-District and Player of the Month honors for a team that finished 24-11 on the season.

Rebuilding a program takes time, especially one that was unable to complete a full season. That’s something that Greyhound Athletic Director Chris Parker is aware of, and something he has faith in his coach to see through this season.

“Coach Corona was put in a tough position when hired in that she had only a couple of months to recruit for her first season, and that is tough on any coach because the higher quality student-athletes are going to have already committed elsewhere,” said Greyhound Athletic Director Chris Parker. “Now that she will have a full season to recruit the type of student-athlete who fits our culture, I have every confidence this will be the beginning of the greatest days of the Lady Greyhound program.”