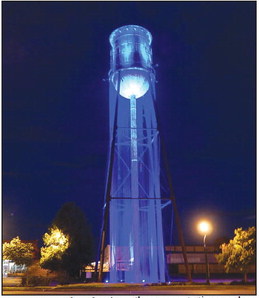 Watershed glowed noticeably brighter Wednesday night after Main Street West Memphis Executive Director Deborah Abernathy called the Times to say the lights on the east Broadway Water tower had been fixed. Abernathy maintained repairs were completed during the first week in May. She responded to questions about claims made in the TV report announcing the city social media campaign called Watershed Wednesday referring to the title of the month old stainless steel cable and LED art work on the 1923 water tower.

In a separate attempt to provide an accurate rebuttal to our initial report on June 3 about the dimmer light display, City Communications Director Nick Coulter was twice asked to correct any factual error about the lights being dimmer and electrician struggle to make it bright again. He responded with appreciation for the inquiry but provided no changes to the initial story.

A June 5 picture showed Watershed glowing in all its original glory after a picture eight days earlier showed a much dimmer hue of blue.

The two city officials held different accounts as to when the lights were fixed.

“It’s been fixed since four days after they had to replace it,” said Abernathy.

“A lot of that issue was the electrician creating problems but I was disappointed in the article. I don’ think it’s dimmer. It’s not supposed to be as bright up top as down below. It’s supposed to create those patterns on the tank. I haven’t noticed a difference at all.”

Abernathy explained the reason for responding to the last report about the lights on Watershed. The one month report card stung.

“I guess the real reason I’m calling is my board and everybody gets so upset when they see negative things when we are trying so hard to do something good,” said Abernathy.

Abernathy also claimed in the TV piece that positive public opinion of the controversial sculpture was growing.

“I based that on my Facebook responses,” said Abernathy. “All of them have been very positive, nothing negative about it.”

However a check of the Main Street West Memphis Facebook showed no posts about Watershed going back to the April 25 announcement of the Grand Lighting and there were zero comments or reactions leading up to the ceremony. Part of the lights failed to come on during that ceremony.

The City of West Memphis shared the WREG piece where comments were anything but all positive. Abernathy knew it as she responded in the link with her own comments defending the project.

Retired West Memphis Fire Battalion Chief Charles Stover said the city priorities were wrong. The money spent on Watershed he claimed would have been better spent on wages and living conditions at the stations in efforts to retain firefighters.

“Mayor Johnson should be ashamed of himself considering the conditions of those fire stations and blowing $250,000 on a piece of scrap metal…

priorities suck. They have lost 60 fireman in the last six years and same at the police department,” posted Stover.

“We got ripped off on that,” posted Jeremy Simpson. “I seen it and it’s not all that.”

Amanda Walraven posted, “Like if I would have put so much on the water tower… maybe because I don’t go that way after dark. I’m going to make a point to do so.”

“Why do you keep bringing up the dad gum lights under the bridge for? We did not have anything to do with that,” Abernathy asked in her phone call to the Times. One is an art concept and the other is under lighting, totally different things.

Citizens do in fact see the there projects intertwined under the umbrella of the city of West Memphis.

Justin Craven commented, “I remember getting lights under the overpass between Marion and West Memphis, but I could not tell you the last time I saw them on.”

“Could the money be used to light up the overpass lights, they are never on,” posted Anthony Gilbert.

Abernathy personally responded to two negative comments on when the city posted the first night time picture of the tank.

“It was funded from a special tax set up 30 years ago, this same fund goes to the police and fire departments and maintains the industrial park,” commented Abernathy.

“Seems if it was in the same fund for police and fire it should have gone there first, “ replied Teresa Ray Wheeler.

Michael Ford led the way with some positive feedback calling it a first step to revitalization.

Thirty other positive comments were logged as initial responses to the city grand opening pictures with descriptors like “pretty cool,” “awesome,” “beautiful,” and “love it.”

Many of those collected some more thumbs up approval.

Abernathy also posted three separate times on her personal page about the tower, twice using artistic techniques like time lapse photography. In all she collected 107 thumbs up and two positive comments from her own Facebook friends and family, the sole basis she claimed on television for public opinion turning the corner to positive.

The last item Abernathy shared in the television piece was that the $240,000 project hadn’t tapped out the whole 30-year-old industrial park fund for specifically dedicated city projects, like the fire department and police.

“This project happened to come up and the money was sitting there waiting to be used,” Abernathy told WREG. “But that doesn’t mean that we used it all — it just means we used a small portion of it.”