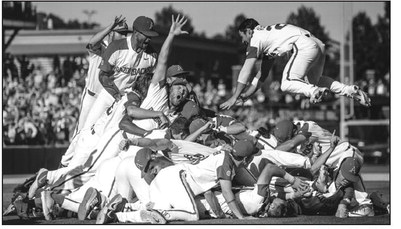 FAYETTEVILLE — For the 10th time in program history and sixth time under head coach Dave Van Horn, Arkansas is headed to the College World Series after Monday afternoon’s 14-1 win over Ole Miss in Game 3 of the NCAA Fayetteville Super Regional.

Arkansas (46-18) jumped on Ole Miss (41-27) from the start with eight combined runs in the second through fourth innings.

Heston Kjerstad, Casey Opitz and Trevor Ezell all came away with three-hit games. For Ezell, it capped an extraordinary weekend at the plate as he finished the super regional 7-for-14 (.500) with three doubles, a home run and four RBIs.

On the flip side, Arkansas starting pitcher Patrick Wicklander was not able to make it through two innings as he gave up an early first-inning run and then couldn’t get the final out in the second. However, Cody Scroggins relieved him with two outs in the second inning and went on to pitch 4.1 innings of scoreless relief, striking out eight, his most in a relief appearance this year.

The Razorbacks will be paired up with Florida State for the first game of the College World Series.

Game information including date and time will be announced later.

The game looked like it might be headed to a slugfest after Ole Miss scored the game’s first run on a Cooper Johnson single, but Arkansas roared back with four runs in the second, three runs in the third, single runs in the fourth and fifth, followed by a fivespot in the sixth inning.

With Wicklander not making it through the second inning on Monday, Scroggins was called upon to come out of the bullpen earlier than expected.

Scroggins earned every bit of his third victory of the year, giving up just two hits over the next 4.1 innings, while striking out eight and walking none. It was Scroggins’ longest relief appearance of the year and first of the Super Regional. Jacob Kostyshock and Matt Cronin both followed Scroggins for the final three innings. Combined, they allowed only three hits and struck out one.

Sophomore Heston Kjerstad was 1-for-9 in the super regional coming in to Monday’s game, but broke out his bat in a big way, going 3-for-4 in the game, including a huge blast over the right field bullpen in the bottom of the fifth inning. It was Kjerstad’s 16th home run of the year. Kjerstad also doubled in his first two atbats, tying his career-high.

His two-bagger in the third inning drove in Arkansas’ fifth and sixth runs of the game. Kjerstad is now third in the SEC in home runs.