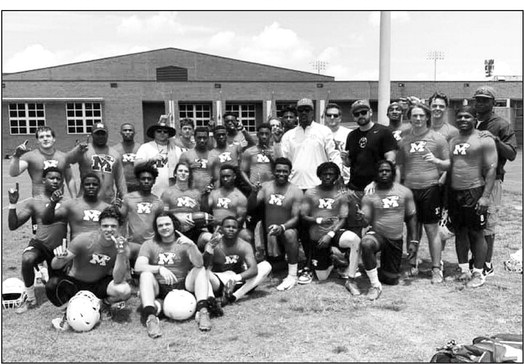 Patriots getting in shape with 7-on-7 action

Marion School District The first week of football season is eleven weeks away, but Marion football picked up some important 7-on-7 wins last week. The Patriots won all three of their games at the University of Memphis practice field against three teams that would help prepare them for the regular season.

“Any opportunity you get to play in front of college coaches, you want to make the most of it,” Marion coach Keith Houston said. “We did a good job executing plays, we grew a little bit defensively, and got some big wins.”

Marion picked up wins over Callaway, Desoto Central and Bartlett at the Memphis tournament. All three teams run a spread offense that is similar to the majority of teams that the Pats will play in the regular season, something Houston said was important for his defense to get reps against.

One aspect of the team Houston wanted to work on following the spring scrimmage was their young defensive secondary. While it may still be an area of question for Houston, he did say that he thought they have been playing better recently and that they will continue to work hard to prepare before the end of August.

While newer defenders played some their of first downs against another team, Houston said some of his veterans used the day to acclimate themselves to full-speed action.

He said he was impressed with just how far along veteran defenders like senior Brandon Calvert and juniors Antonio Grays and Brandon Hays have developed.

Houston talked highly about junior quarterback Daedrick Cail’s play in the tournament, saying his arm has looked solid all offseason and is still getting better. He also pleased with the performances of his receivers throughout the day, specifically crediting the play of Slade Webb and Markel Wynn.

“Webb and Wynn both had big days today. I don’t remember them dropping any passes,” said Houston. “All of our receivers looked good, but those two stood out.”

The Patriots have other plans for the summer, such as camps, practices and more 7-on-7 tournaments.

For example, eight players from Marion’s offensive and defensive lines attended a camp at the University of Alabama on Saturday, June 8. The first game of the season will be at Patriot Stadium on Friday, Aug. 30, against the Blytheville Chickasaws.