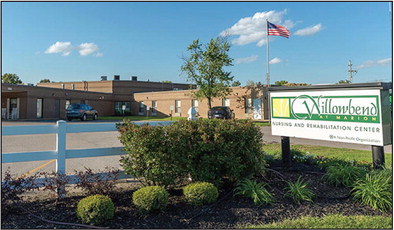 Marion is considering an offer to take possession of the former Willowbend Nursing & Rehabilitation Center.

Mayor Frank Fogleman told the City Council that he was approached by representatives from Willowbend about whether the city might be interested in acquiring the building.

“He didn’t name a price or anything of that nature,” Fogleman said. “I have the (building) plans if anybody would like to look at it and see what you think about it.”

The building is about 18,000 square feet and is located on Highway 64 at Hardin Village. Willowbend built a new 118-bed 55,000 square foot facility on six acres on Canal Street in the Bayou Vista subdivision that employs 110 full and part-time employees.

Fogleman said the proposal to use the building was sudden and unexpected, but is an intriguing one. However, he hasn’t had time yet to evaluate what the city might use it for if they took it over.

“It’s kind of out of the blue,” Fogleman said. “I’m still looking at what we could do with it.

Fogleman said the building has a large center area and several arms which branch off and used to house patients. The residential arms are narrow and may limit what the city could use the space for.

One possibility may be to use the building as a new city hall office complex.

The current city hall is in an old bank building on the corner of Hwy. 77 and Military Road and shares space with the district court.

“It’s kind of like a star fish,” Fogleman said.

“There are a lot of walls in there that would have to be moved around. Even if you took the walls out, you would still have a narrow slender space.”

Fogleman said other considerations are the age of the roof, maintenance costs, condition of the heating and air system, and parking.

“Occasionally at the current city hall we have large crowds and we have parking space next door to use,” Fogleman said. “At Willowbend you have a street and a highway on two sides and a neighboring business on the other two sides. So if we found a use for it, what would we do about park- ing? Those are just some thoughts that cross my mind and I don’t have any answers to them yet.”

The owners might also consider trading the building for some street improvements at their new facility.

“There is a gravel road that runs behind the new facility,” Fogleman said. ‘I don’t have any idea what that may cost or what the length is.”

Fogleman said he will take a closer look at the building and consult with the City Council to see what they would like to do.

“So it is on the table,” Fogleman said. “We will see what the impact could be and how we could use it and what we would use it for.”