Family of man murdered in 1954 still looking for answers 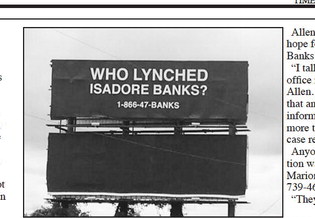 Jim Banks was 11 years old when his 59-year-old father, Isadore Banks, was beaten, tied and set on fire near the Crittenden Memorial Gardens on June 4, 1954. Local newspaper reports at that time labeled the perpetrators as “fiends.” With the 65th anniversary of the lynching last week, the Banks family has renewed its call for justice.

The younger Banks claims his father’s murder was never investigated.

Standing 6 feet, 7 inches tall and weighing at least 300 pounds, Isadore Banks presented an imposing figure and was most likely brutalized to death by a gang.

Banks spoke about his father as part of the Race, Religion and Politics Forum at the Crittenden County NAACP in May.

“He was very intimidating,” said Banks. “And that he was a black man made him even more intimidating. It was a stereotype that black men were always ready to fight; that they carried knives or guns.”

The murder took place one year before the infamous Emmett Till murder in Mississippi and Rosa Parks’s refusal to move to the back of a bus in Birmingham, two incidents which served to ignite the Civil Rights Movement.

In contrast, the Banks case went largely unnoticed until a 2010 memorial service honoring Banks as a World War I veteran.

Jim Banks said his father owned 2,000 acres of land that included property in modern-day Marion between Highway 77 and Interstate 55, just as land speculation about the Interstate had begun. He also owned land in the contemporary subdivision of River Trace. Banks pioneered the delivery of electricity to Marion and parlayed his money by purchasing farmland and founding a cotton gin which offered fair prices to black farmers. “What was the motive in killing my father?” asked Banks. “Simple — it was the land and the money.

Both disappeared after the murder.”

Lost documents at both the bank and the court house still seemed more than coincidence to Banks. He pointed to a history of lost or destroyed Black owned land documents under Jim Crow.

“Look at the Elaine massacre,” said Banks. “The court house was burned down so there were no records of anyone who owned land.” Banks said when the family went to the courthouse

“So, we’ve gone through this charade of what has happened and what has not happened,” said Banks. “In the end there is nothing there. It was destroyed.

Your history was destroyed.”

“My father’s death was never investigated,” said Banks. “There was a fear of White men and they were all unified together.

It was June, 1954. Isadore did not fall in line with how most blacks felt. He was reticent about other things going on but quiet, laid back and reserved.”

Jim Banks shared a defining moment from his youth with his father and called for justice.

“I was about seven and he was sitting on the side of my bed,” said Banks. “He pulled up his pants and said do you see how I put my pants on? I said yes. He said that is how every man puts his pants on which meant that there is no man better than you. You are just as great as any man that walked on the earth. I never forgot that until this day. No man has power over me, we are both men.” The lesson still carried meaning for him today.

“Something about that to this day that blacks still perceive themselves with a feeling of inferiority,” said Banks. “That’s because they been taught that inferiority. The message was clear and delivered fear, if they could do that to a man like Isadore Banks and get away with it, they could do it to you. It is getting better, but it is certainly still there.”

Banks said the lack of an investigation was a conspiracy.

“The motivation was his land and his money,” said Banks. “That’s what turned up missing.”

“I’ve got the State of Arkansas, The County of Crittenden, and the City of Marion — all these people are complicit in the murder,” said Crittenden County NAACP President Shabaka Afrika.

County Sheriff Mike Allen said the FBI Civil Rights Division had investigated the murder before his time in office. The query was confounded by the missing documents.

“It’s my understanding records were destroyed in a flood at the courthouse in the 1970s” said Crittenden County Sheriff Mike Allen in a separate interview.

Allen looked into case and said it was investigated by the Civil Rights Division of the FBI from 2010 through 2013 after a CNN reported by Wayne Drash. on the occasion of the World War I veteran’s memorial. The FBI asked Drash to hand over his files on the case but Drash never did. After three years, investigators concluded any witnesses or perpetrators had likely taken their accounts to the grave.

Allen provided a copy of the FBI report which read, “Despite extensive efforts no subjects have been identified because of the destruction of the FBI and local investigation files, the lack of any known living witnesses, the various unsubstantiated theories of motive including the fact that the victim’s death was racially motivated. There is no reasonable possibilities that further investigations will lead to a prosecutable case.”

Allen offered a ray of hope for justice for the Banks family.

“I talked to the local FBI office in Marion,” said Allen. “They did state that anyone with credible information that they could more than likely have the case reopened.”

“They said they’d pass the information along to the Civil Rights Division,” said Allen.