‘Yours: The Civil War, a Love Triangle, and the Steamboat Sultana’ 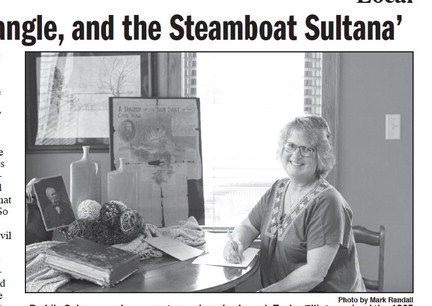 A descendant of a Sultana survivor has written a new young-adult novel inspired by the tragic event.

Dr. Lila Sybesma, whose great-grand-uncle, Joseph Taylor Elliot survived the 1865 explosion of the Sultana, said the book titled “Yours: The Civil War, a Love Triangle, and the Steamboat Sultana,” is a fictional but historically inspired tale of three neighbors from Indiana and their experiences during the Civil War.

The plot centers around Sarah Sutton and brothers Gabe Elliott and Joseph Elliott who are in love with Sarah but join the Union Army during the Civil War. They are later taken prisoner and sent to Andersonville prison camp. Sarah joins the war as a nurse in battlefield hospitals where she tends to wounded soldiers. She also crosses Confederate lines and acts as a spy. The three friends are reunited aboard the Sultana then plunged into the chaos when the boat explodes on April 27, 1865. Over 1,200 soldiers and civilians perished in the disaster.

“It’s about a love triangle, Sybesma said. “I figured people really like stories about young people who fall in love and that they would find themselves attached to the characters.

I wanted very much for the reader to feel the personal aspect and have a heart for the people who went through that journey in the war and then the Sultana.”

Though fictional, Sybesma said the accounts of the battles that are a part of the story and the prison camps are based on real accounts, and that every detail of the Sultana itself are all historically accurate.

Sybesma, who is a specialist in reading and early childhood education at Northwestern College in Orange City, Iowa, said it took her ten years of research and writing to complete the novel.

“I used a lot of books about Andersonville, books about Indianapolis in the Civil War, seven or eight about the Sultana, and a lot of manuscripts and soldier’s diaries, because I wanted the reader to get a soldier’s eye view,” Sybesma said. “(Sultana author and expert) Gene Salecker read through the explosion part three times to make sure it was accurate. He said I did a good job. I even researched what phase the moon was in. So it’s darn close.”

She also drew on the Civil War letters of her ancestor. Joseph Taylor Elliott served in the 124th Regiment Indiana Infantry and was captured at the battle of Spring Hill and sent to Andersonville. He was put aboard the Sultana and survived the explosion.

“He saved a spot on a cot with his hat,” Sybesma said. “And then somebody took his spot. Whoever took his spot perished on the Sultana, but he was saved.”

Elliott and a comrade grabbed ahold of a piece of the staircase and floated downriver together. They got caught in a whirlpool or eddy and his friend slipped off and drowned.

Elliott was eventually picked up by a gunboat.

He wrote a memoir of the sinking called “The Sultana Disaster”

“He was quite an eloquent writer,” Sybesma said. “On the boat he said the soldiers were ‘singed off like flies.’ So I included some of his quotes and some of the quotes from other soldiers that I found. Sybesma said she didn’t really know the story of the Sultana or her ancestor until she came across Elliott’s book in the family genealogy, and asked her mother about it.

“My mom said it was about an explosion,” Sybesma said. “She thought I knew about the Sultana. But I didn’t. I had never heard of it. But immediately after I read about it, I knew I wanted to write about it.”

Ironically, Sybesma shares something in common with Elliott. Both of their books were published by Indiana Historical Press. “I’m writing with the ghost of Joseph Taylor Elliott one hundred years later,” Sybesma said.