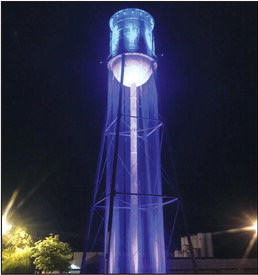 The newest West Memphis city monument needed a fix. The Watershed artwork on the east Broadway water tank failed to light fully during its grand unveiling last Thursday night in front of 75 spectators on hand. It turned out that the special switch used to time the ceremonial lighting simply did not work.

City Communications Director Nick Coulter said the solution was not so monumental.

“The switch did not work right, it created quite a hum but not everything lit,” said Coulter. “The photo eye that turns it on each day after dark works fine.”

The blue lights adorning the art pay homage to the Blues music history in the city and the blue water symbolism of the tank’s past being used as part of the cotton compress business 90 years ago. The tower became the first in the city water supply system and has served as a landmark in town. Artist Randy Walker kept the rusty patina as a reminder of that past and painted the tower only, with the blue night lights for the symbolic themes. The photo cell switch on the tower faces west and the lights come on each evening with complete darkness and turn off shortly after first light each morning.