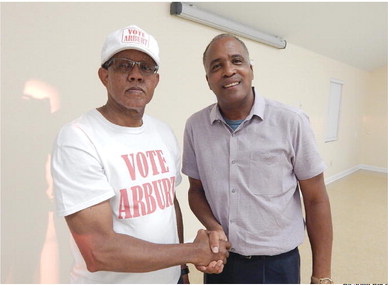 The six-way race to fill the West Memphis Ward 4 city council position vacated when Marco McClendon was elected mayor ended with no clear winner and two men left vying for the seat in a runoff election next month.

In all, 150 votes were cast, with educator and former Langston Bag employee, David Murray earning the most votes (53), followed by former Fire Chief and now County Bailiff, Arburt Robinson (28) coming in second.

Three provisional ballots were received and will be counted if those particular voters present identification to the election commission during its meeting on Monday, May 20, at 3 p.m.

at the Election Commission office in the County Courthouse Annex Building. The three provisional ballots cast were not enough to upset the top two finishers, but enough to possibly change the overall order of finish for the consolation candidates.

“We’d like to count every vote because every vote matters,” said Election Commissioner Dixie Carlson. “ We hope those voters will come and present their identification.”

Councilman James Pulliaum attended the vote count and weighed in as pundit.

“Ward 4 will have its representation and voice,” said Pulliaum. “This next election will help us fill the gap and solidify the resolve of the city to move forward.”

Pulliaum spent time with contenders after the final returns. He personally thanked each candidate and encouraged them to stay active in city issues.

The runoff election between Murray and Robinson was set for June 11, and will be held at the Church of Christ on 7th Street, preceded by a week of early voting slated to begin Monday, June 3, and run for the entire week at the courthouse.