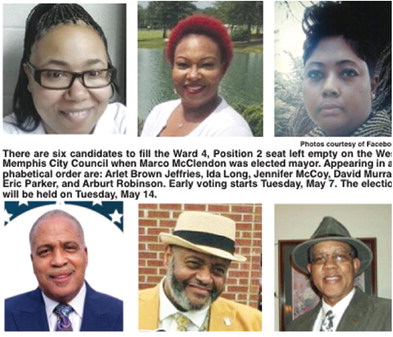 ralphhardin@gmail.com When then-city councilman Marco McClendon vacated his seat on the council at the first of the year to take office as the mayor of the city, it created a hole on the city council in Ward 4, Position 2. Now, a special election will be held today fill that vacancy, and voters will have a full slate of candidates from which to choose. Six candidates will be on the ballot in today’s special election. They are (in ballot position order):

• Arlet Brown Jeffries The winner will sit at the council representing West Memphis Ward 4, Position 2, for the remainder of what would have been McClendon’s term. The city’s five Position 2 seats will all be contested in November 2020, so whomever is ultimately elected will be up for re-election next year.

securing a majority (51 percent) of the vote, a run-off between the top two candidates at a later date.