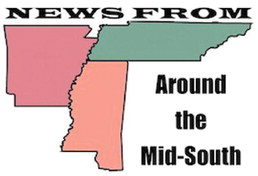 GRUBBS — An alligator estimated to be 9-feet in length was displaced after heavy rain in the Grubbs, Arkansas, area caused nearby rivers to overflow.

Local resident Frank Pierce told Game & Fish Commission officials that he and his family spotted the large reptile “laying out in the field” as they were on their way to go fishing.

Later, authorities with the Jackson County Sheriff’s Office were called. Sheriff David Lucas said officials at first thought the call was a joke.

“When we first got the call, we thought well this is some kind of prank or a log or something because you just don’t see gators this far north,” he told the news station. But he would soon find out it was no hoax.

“I looked out in the field and saw it sitting there and I thought, ‘I don’t know what we’re going to do,’” he added.

Arkansas Game and Fish Commission wildlife biologist Mark Barbee explained why the gator found its way to such an unusual place, citing heavy rainfall as a likely reason.

“What’s happened is with all the recent rainfall, it’s just displaced him out of the river system,” he said.

A second gator was also reportedly found in the same area.

VICKSBURG, Miss. — As the Mississippi River continues to rise, officials opened the Bonnet Carré Spillway on Friday. Never before has the spillway been opened twice in the same year.

The Army Corps of Engineers opened the spillway Friday afternoon. This is the 14th operation of the structure since 1937, and the first time it has been opened twice during the same high-water event. The decision to open Bonnet Carré was issued by Maj. Gen. Richard G. Kaiser, commander of the Mississippi Valley Division in Vicksburg, Mississippi. Maj. Gen. Richard “Rick” Kaiser, Commander, Mississippi Valley Division U.S. Army Corps of Engineers said, “This is the wettest we’ve been in 124 years.”

Officials decided to open the spillway to “relieve pressure on main levels, maintain river stages and regulate the flow downriver from the spillway,” according to the U.S. Army Corps of Engineers.

“On May 21, 2019, this flood event will become the longest in duration since the 135-day-long flood event in 1927 at Baton Rouge,” meteorologist Kristina Pydynowski said. “The river went above flood stage during the morning of Jan. 6 and is forecast to remain out of its banks through at least mid-June.”

Wildwood Grove is said to be inspired by Parton’s childhood in East Tennessee and draws on the natural beauty of the area. It will feature 11themed attractions like Blackbear Trail, Hidden Hollow, Sycamore Swing and The Wildwood Tree.

“When I was a little girl growing up in the hills of the Smoky Mountains, I’d often let my imagination just run away—something I still do now—dreaming these big dreams about what it’d be like to venture off with a family of bears in to the woods or how fun it would be to hitch a ride with the butterflies and dragonflies,” Parton said. “All us kids would splash and play in the creeks and ponds around home and have these daydreams about the world around us, and that’s what’s so special about Wildwood Grove.”

The park will feature a new suspended rollercoaster called ‘The Dragon Flier’.

With a price tag of $37 million, Dollywood President Craig Ross said in August at the Wildwood Grove announcement that the expansion cost more to build than the entire park when it opened.