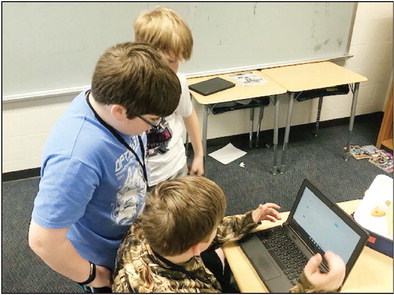 Marion School District The stock market can be an enigma to most, but a group of students at Marion’s Math, Science and Technology Magnet School (MST) is among the top in the state at solving it. A group of sixth graders known as BRAVO Team finished first in the East Arkansas region of SIFMA’s Stock Market Game and earned an invitation to a state luncheon in Little Rock.

“It’s remarkable from my point of view what all of these kids have done these past few months,” Grindstaff said. “They come in during their lunch break and eat while they work.

These kids are doing something that connects them to the world. That’s what education’s all about.”

The Stock Market Game is a program of the Securities Industry and Financial Markets Association (SIFMA) and uses the real stock exchange to give students across the nation a simulation in stock trading.

Groups are given one hundred thousand fictional dollars and are ranked in their region and state according to the amount of equity they can accumulate.

BRAVO Team, one of the four groups at MST, finished first out of over 190 teams in their region by accruing a stock portfolio worth $115,000 over a three month period. The 15 percent return on investment also ranked 26th out of over 2,000 teams in Arkansas.

Grindstaff did not help the students pick what they should or should not invest in, but he did teach them about sustainable long stocks, bonds and mutual funds. The students also wrote essays about sustainable stocks and submitted them for a competition set up by InvestRight.

BRAVO Team’s members are Re’Ajah Ware, Charlie Cantrell, Bradley Tolleson, Gavin Gurley and Will Smith. Administrators, teachers and family of the students were also invitied to the state luncheon in Little Rock on Monday.