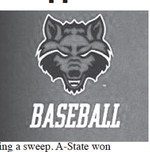 Jack Jumper (2-2) pitched 1.2 innings in relief where he allowed no hits on three runs while walking four.

The Red Wolves took an early 2-0 advantage over Appalachian State, through the first four innings, when Sky-Lar Culver scored on a throwing error and Jacob Jablonski sliced a two-out triple to right center to welcome home Alex Howard.

Appalachian State pulled within 3-2, in the sixth inning, when Kendall McGowan launched a tworun homerun to left field.

The Scarlet and Black took the lead back in the home half of the sixth, when Jaylon Deshazier sent a single through center field to welcome home Tyler Duncan. Deshazier finished the match one-for-four with an RBI.

The Mountaineers added insurance in the ninth on two A-State costly errors.

The loss prevented the Red Wolves from notching a sweep. A-State won Friday’s game 10-2, and wallopped the Mountaineers 27-8 on Saturday. For the latest on A-State baseball, including schedule changes, check AStateRedWolves. com and follow the team by logging onto the Arkansas State Baseball Facebook page or by following the team on Twitter (@AState-Baseball) and Instagram (arkansasstatebaseball).