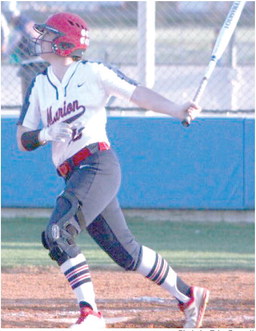 Marion School District Insurance runs proved huge for the Lady Patriot softball team (12-9 overall) on Thursday night against the Olive Branch Lady Conquistadors (5-9). Marion scored at least one run in all but one inning of the 9-8 win.

“Our at bats were a lot better tonight than they have been,” Coach Sean Gray said about his team’s offense after the game.

“We’ve always said a sign of a good team is that they score every inning or to put something on the scoreboard consistently. That’s what we did all game long and it paid off, because we needed every one of those runs.”

The Pats and Quistors seemed to be on the same page to start the game. The teams were tied at one after the first inning, then tied at 5 after the second. Marion scored all four of their runs in the top of the second with two outs.

The scoring was halted in the third inning, but Marion added a run in every inning that followed to take a 9-5 lead into the bottom of the seventh. Every extra run proved its worth after a three-run home run by Olive Branch’s Bailey Lewers trimmed the Marion lead to one.

Marion’s defense kept Olive Branch from reaching first base after the home run to secure the 9-8 win.

The defense also earned words of praise from Gray after the game.

“The defense was excellent. I can’t think of any plays in the field that we didn’t make tonight,” Gray said about his fielders.

“We’ve been looking for a competitive spirit from these girls after being (close) in all of our games lately, and tonight we were able to push through.”

Marion was out-hit 12-9 by the Conquistadors, but the Patriot defense did not commit an error in the game, compared to four by Olive Branch. Junior Megan Adams had two hits and three RBIs. Freshman Emerson Miller also had a multi-hit day with three doubles.

Junior Meagan Tolleson also had a three RBI night to go with her one hit. Junior starting pitcher Hartley Charlton drove in a pair of runs, and sophomore Winsley Brothers also had an RBI.

Charlton pitched 1.2 innings, giving up five runs on two hits. She was replaced by Adams, who recorded three strikeouts and gave up three runs on 76 pitches.

“It just wasn’t Hart’s night tonight. (Olive Branch) was just on her ball tonight. Sometimes its like that,” Gray said about his pitchers. “Adams had them fooled for a long time.

They didn’t get to her until the seventh. She pitched a phenomenal, gutsy game against a very talented hitting team.”