Earle Council: Get your trash cans off the curb 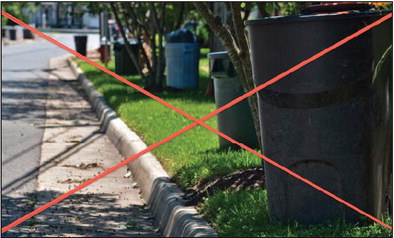 Earle residents who leave their garbage carts out by the roadside for too long could face a new fine.

The City Council passed an ordinance on first reading that would require residents to bring their garbage cans off the road within three days of their garbage pickup day.

“Apparently there is a problem with residents not removing their garbage carts in a timely manner,” said Mayor Sherman Smith. “So this ordinance would levy a penalty for not doing so and set some guidelines for when they need to move them.”

Councilman Donnie Cheers, who proposed the ordinance, said the city never got around to including this requirement in the original ordinance which established curbside pickup.

Cheers said there are too many residents now who are just leaving their garbage carts out by the road and that it is both unsightly and unsanitary.

“We never did do anything about the carts,” Cheers said. “So this will kind of put some teeth in it.”

Councilwoman Sandy Holloway asked who would set the fines.

City Attorney Davis Loftin said the case would go before a judge and it will be up to the judge to determine the amount.

Smith said while he isn’t against imposing a fine, he asked the council to pass it on a first reading only so that residents will have a chance to give their feedback at the next two council meetings.

An ordinance must be read and passed three times in order for it to become law unless an emergency clause is invoked.

“If we are going to pass this, I’d like to see us do it in three separate readings,” Smith said.

Smith said the city needs to get its own trash situation fixed first before they start requiring residents to take their garbage carts off the street.

The city’s automated garbage truck has been broken down and the city has had to have Parkin pick up its trash until the truck is fixed.

“We don’t need to start enforcing this if we can’t even get our garbage picked up on time,” Smith said. “Sometimes we’ve had it stay out there two or three days. We’ve got to get this truck right. So that will give us time to get ourselves together and give residents more time to get acclimated to what is going on versus BAM! I have some reservations about it.

So let’s get our equipment up so we can give people a schedule and ourselves time for a little more discussion if necessary.”

Cheers said it is hard to beautify the city when people are leaving their garbage carts out.

“If you go down some streets, there are garbage carts sitting in the street,” Cheers said. “It helps enhance the city when you pull your carts back.”