McClendon outlines ‘State of the City’ 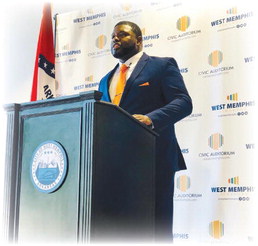 Mayor Marco McClendon filed his first State of the City report with the West Memphis City Council last week and made a Facebook Live address on Tuesday recounting highlights from each department in 2018 and outlining hopes for upcoming city undertakings.

In a bit of a rookie misstep, the mayor, serving his first term, missed the deadline for the State of the City report under Arkansas code 1458-302 during the first 90 days of the year by filing the report with city council April 4.

McClendon exuded optimism for the future in his written report.

“We are making the impossible possible, turning ‘no’ into ‘yes’ and ‘no, we can’t’ into ‘yes, we can!’” exclaimed McClendon.

“The remaining dreams of yesterday are rapidly becoming the reality of today.”

McClendon tipped his cap to his predecessor, former Mayor Bill Johnson, for his fiscal restraint.

“Sound decisions and fiscal responsibility from the previous administration has allowed us to prosper,” said McClendon. “We will not tear the down this foundation which left us in great shape. We will build our future on this solid rock.”

The mayor noted the city utility enterprise was in the second year of a five-year corrective action plan under the Arkansas Department of Environmental Quality and planned on spending $7.5 million to correct lingering sewer issues. The mayor revealed the utility began budget planning for a second water treatment plant to be located in the Mid-America Industrial Park.

On the economic development front the mayor reported the completion of the Grow 2040 vision, a 20-year comprehensive growth and development plan. The city chief executive noted Rail business growth opportunities at the West Memphis International Rail Port and Logistics Park on the south side of the city and plans to complete the adjacent South Loop to serve truck traffic.

The mayor also highlighted shovel ready Entergy certifi cation of the 1800-acre Mega-site at the city’s west end on Interstate 40, a joint venture with Marion and the county. The Advertising and Promotions Commission stepped up effort to attract retailers with its new incentive program.

Ninety-five percent of the objectives required under the ACT Work Ready Community Certification were nailed down last year.

Building and Community Development issued commercial construction permits in 2018 amounting to $20,000,000 including seven new construction permits and 22 permits to remodel or expand businesses. The city paid for 42 houses to be demolished against twelve new housing starts permitted along with 48 residential remodels.

The mayor reported nothing from the Parks Department but a bond refinance deal allowed for plans to upgrade Marion Rose ball complex ball fields and to build a splash pad in Tilden Rodgers Park.

The Mayor’s ambitious hopes for the immediate future included new buildings for the library, two new fire stations, a new police substation, a new municipal courthouse, along with renovations to both the City Hall and the Roberta Jackson Neighborhood

“We now control our city narrative,” said McClendon. “Through the creative direction of our Communication Director Nick Coulter and our (Police) Community Outreach Director Tawana Bailey, we now tell our story, which is a great story.”