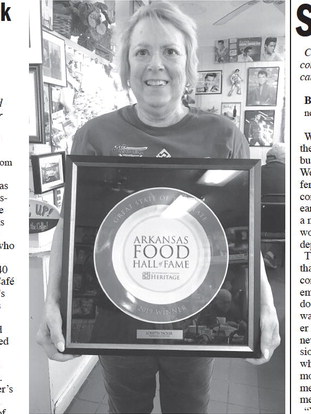 On Feb. 26, the Arkansas Food Hall of Fame Tuesday night inducted three restaurants into its ranks and recognized an East Arkansas restaurateur who has kept her restaurant running for more than 40 years. Craig Brothers Café (better known as Craig’s Bar-B-Que) of Devall’s Bluff, Keeney’s Food Market of Malvern, and Burge’s Hickory Smoked Turkeys and Hams of Lewisville made up the 2019 hall of fame class.

Loretta Tacker of Tacker’s Shake Shack in Marion was named Proprietor of the Year. It was a year that turned its focus away from the metropolitan areas to highlight small-town restaurants that have anchored their communities for decades.

“We have so many old restaurants in the state,” said author and columnist Rex Nelson, who served as master of ceremonies for the event. “You talk about Craig’s, you talk about Keeney’s, I mean before I was born, those places were around. The traditions we have and the fact that so many of these places have survived. As you know, to make it five or ten years in the restaurant business is a big deal.

And we have a state full of restaurants that have been around 40, 50 or 60 years even.”

Loretta Tacker and family were on hand to accept the award. Loretta and her husband John opened the restaurant in the 1970s and ran the business together until John’s death in 2005.

Today, Tacker runs the company with the help of her family. Tacker’s Shake Shack is a cultural hub for Marion, a place where everyone knows everyone. Ordering off the six-page menu is daunting (and rewarding), but if you don’t get dessert, you will be missing out. The pies, ice cream, bread pudding and other sweet things at Tacker’s are the stuff of legend.

Another local eatery, Uncle John’s in Crawfordsville, was a nominee in the “Gone But Not Forgotten” category. Uncle John’s was destroyed in a fire last year.

By the Evening Times News Staff

Don’t be afraid of taking a little ‘Me Time’

It’s October, and of course, the month is capped off with Halloween, so many of us will spend...

I am turning 67 in October and as of today am still employed full time. I really do not plan...