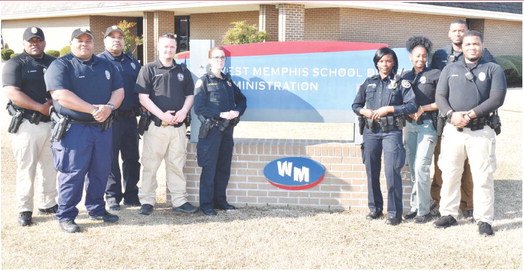 WM School District The West Memphis School District just made its schools even safer recently by placing Student Resource Officers at each of the district’s 10 campuses.

The SROs, in a working agreement between the school district and the West Memphis Police Department, began their work during the final week of March.

The need for safety in a world which requires even more security measures has been answered by the WMSD.

“School safety is paramount to anything else we do as a school district,” said superintendent Jon Collins. “You look around the nation, as sad as it is, the reality is there is craziness and sin in the world.

What we are trying to do with our partnership with the West Memphis Police Department will hopefully deter some of that and keep our children and our staff safe in order to provide a quality education for the young people of West Memphis.”

Having trained officers at each campus will provide peace of mind to the administrators, teachers, staff and students, according to assistant police chief Robert Langston.

“It’s good that we will be getting our officers engaged to the respective schools and getting to know the students,” said Langston. “With the Mayor’s and the Chief’s initiative it’s a big step with our community outreach. We want to immediately let the students see our officers around each school so that they get to know them and to give our officers a chance to let them know they’re good people. The big benefit for the schools is it increases school security. We have the SkyCops on each campus and with an officer at each school it’s only going to help all the schools. It should also help the parents of the students feel like their kids are safer.”

Don’t be afraid of taking a little ‘Me Time’

It’s October, and of course, the month is capped off with Halloween, so many of us will spend...

I am turning 67 in October and as of today am still employed full time. I really do not plan...