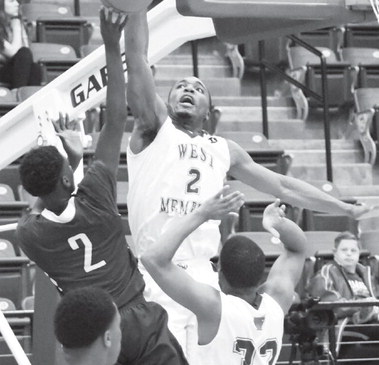 WM School District PEARCY — Chris Moore had game-high totals of 32 points, 20 rebounds and 6 blocks to lead the West Memphis Blue Devils to a 63-52 victory over El Dorado Thursday in their first-round 5A state tournament game.

Two years ago as a ninth-grader the Blue Devils lost 47-44 in overtime in heart-breaking fashion in a first-round state tournament game at Lake Hamilton High School.

“The last time we came here to play we played terrible and lost,” said Moore.

“My mindset today was we ain’t gonna lose. I wanted to do everything I could to try and erase that memory.” “He’s a phenomenal athlete,” Blue Devil head coach Marcus Brown said of Moore. “He was simply the man out there tonight.

I will say, though, that our team did a great job of getting him the ball.”

And when Moore got it, even with two and sometimes three Wildcats draped over him, he over-matched the El Dorado defenders.

Asked if he was ever conscious of his numbers as the game progressed, Moore said, “Not really, but every time I went to the bench my teammates were saying you got 20, you got 30.”

El Dorado clawed its way back into it, twice cutting the Blue Devil lead to 8 points in the first half before West Memphis claimed a 30-20 halftime cushion.

“We let up after we got off to that big lead,” Brown said. “We probably could have been up 20 at halftime.”

The night was clearly defined by the Blue Devil big man. Moore scored all of his team’s field goals in the fourth quarter and tallied 14 points in all in the final stanza.

After El Dorado cut the West Memphis lead to 50-43 with 3:10 to play in the fourth quarter, the Blue Devils hit the Wildcats with a 13-2 run with Moore scoring 6 of those points.

In round two, the Maumelle Hornets tried to exploit the West Memphis Blue Devils’ biggest weakness last Friday night, but to no avail.

Maumelle tried the old ‘hack-a-shack” approach with 3:40 remaining in the game, hoping the Blue Devils’ free-throw shooting would finally betray them.

But the Blue Devils canned 9 out of 12 down the stretch to easily dispatch the Hornets 63-51 in a Class 5A state quarterfinal game.

Senior Cavin Paige was the largest recipient of the Maumelle strategy and the 5-foot-7 point guard responded by hitting 7 of his 8 free throws on the night.

“We’ve been working hard on free throws for two weeks straight,” said Paige, who led the Blue Devils in scoring with 15 points.

“Coach (Marcus Brown) has been real serious about free throws because we’ve been missing a lot of them.

We started knocking them down tonight. It feels good, too.”

Against Maumelle, the Blue Devils hit 13 of 19 for a respectable 68.4 percent.

Although he wasn’t quite as dominant as he was in the first round, Moore put up 14 points and 13 rebounds in the second round.

For the second straight game, the Blue Devils came out strong, hitting the Hornets with an 18-12 deficit after the first quarter and then building a 27-17 halftime advantage.

“It was very important to come out like that,” Brown added. “Chris established his will inside and Big Daddy did his thing out front. Some of our other guys had some good looks.

The Blue Devils, who outrebounded the Hornets 37-23, led from wire to wire and were never in serious trouble. They built a 16-point lead in the second half (44-28) and Maumelle did not come closer than 9 points on the night.