Patriots take down Golden Eagles on the road 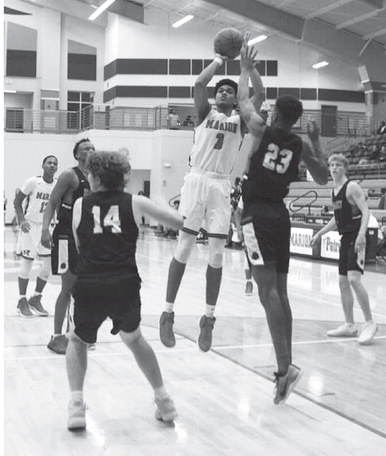 Patriots take down Golden Eagles on the road

Marion School District The road to the playoffs for the Marion Patriots made a stop in Paragould on Friday night to take on the Greene County Tech Golden Eagles. Marion’s boys (19-3, 12-0) clenched their first conference title since 2005 with their win against the Eagles (16-8, 5-7) and extended their winning streak to 13 games. The Lady Patriots (14-12, 6-6) kept their postseason hopes alive with a comeback win against the Lady Eagles (10-13, 3-9).

With a three-game lead over second place West Memphis and only two games left in the season, Marion’s 80-60 win sealed up the Patriots as the number one seed for the state tournament. Marion head coach David Clark was excited for the conference championship after the win, but had already set his sights on the bigger picture.

“To win conference my first year here is huge,” Clark said with a determined look. “I knew they would play as hard as they could tonight, but we’re just looking forward to state playoffs and trying to bring home a state title.”

Marion junior guard Detrick Reeves led all scorers with 27 points, followed by senior forward Tristan Haymon with 11 points and Keyshawn Woods with 10 points. Tech’s Peyton Laubach was the leading scorer for the Eagles with 14 points, followed by Dawson Greer with 13.

The pair made a combined eight three pointers.

“We wanted to cut down the threes in this game,” Clark said about his team’s defense. “We didn’t do a great job covering the three pointers in the first half and that kept them in the game.

We settled down in the second half and got out of here with a 20-point win.”

The Lady Pats started the night off with a comeback win that kept them alive in the playoff hunt. Marion trailed by as many as 12 in the third quarter, but kept fighting back and making clutch free throws to secure the 56-53 win.

Junior guard Joi Montgomery led the scoring attack for the Lady Pats with 17 points, followed by senior guard Tashlee Milow with 15 points. Milow scored 13 of her points in the second half and made one of the two three pointers for the Lady Pats, the other of which was made by Moriah Robinson.

“I’m glad they fought. We told them it was do-or-die,” head coach Shunda Johnson said after the game.

“We’re still not boxing out like we should. It gives teams two to three opportunities to score, but I’m glad we got the win.”

The Lady Eagles have struggled this season, but their ability to make three pointers helped them win the first meeting between the teams and kept them in the lead for the majority of the game. No one made more three pointers than Tiffany Grambling for Tech, who finished with 21 points and five three-pointers.

The win over Tech was also essential for the Lady Pats’ playoff chances and has put Marion in control of their destiny. Up next for the Lady Pats is a meeting against fourth place Paragould (17-8, 7-5).

Marion would tie the Lady Rams for fourth place with a win, but Marion would have the tie-breaker because of their 49-45 victory in their first meeting.

The Lady Pats would also need to either beat Jonesboro in the season finale, or have Paragould lose their final game, which is against Tech.

The Paragould games will also be senior night for the Patriots. Marion’s boys also won their first game against the Rams (6-17, 0-12) in a convincing 6638 rout. Coach Clark was excited for senior night and hopes to see a rowdy crowd at Patriot Arena.

“We’re going to start our seniors. I’m excited for them,” Clark said. “They made our gym a huge home-court advantage. I want a lot of fans at the game for our black-out game. We’ve got like 300 shirts made up for the game for the cheerleaders to throw out.”

Tip off from Patriot Arena is scheduled for 6:00 p.m.