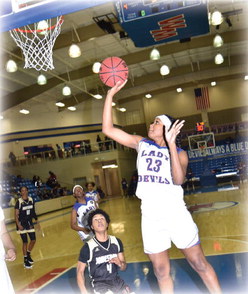 Jonesboro sank 7 of its first 10 shots on the way to building an insurmountable lead and a 47-38 victory over West Memphis.

“We relaxed,” said Jonesboro head coach Jodi Christenberry. “We sometimes get off to a good start and we have trouble holding on to that type of effort.”

Although the loss dampens the Lady Devils’ hopes for a state tournament bid, a fourth-place finish is still possible. The fourth and final spot for the state tournament from the East is currently held by Paragould at 6-5.

The Lady Devils stand 12-9 overall and 5-6 in the conference. They play an all-important game this Friday night at Paragould which in all likelihood will determine the Lady Devils’ postseason fate.

Jonesboro’s accuracy from the field in the first half (18 of 39), coupled with West Memphis’ 9 turnovers in the first quarter and 13 for the half, doomed the hosts. The Lady Devils found themselves down 38-18 to start the fourth quarter before finally springing to life.

A layup by sophomore Ta’Nya Burnett got the Lady Devils started, followed by another layup by junior guard Aryah Hazley, who led her team with 17 points.

But the Lady Hurricane got a crucial three-pointer from junior Tamia Clark and a runner from Kayla Mitchell to push its lead back to 14 (47-33) with 1:59 to play.

“That proved to be the back-breaker for us,” said Christenberry. “Those two shots broke (West Memphis’) momentum and gave us a lead we felt comfortable with.” The Lady Devils, who outrebounded Jonesboro 18-13, also got 9 points from junior center Tierra Bradley while Cortasia Hollins hit 5 and Burnett scored 4.