Blue Devils rely on the three to beat Jonesboro at home 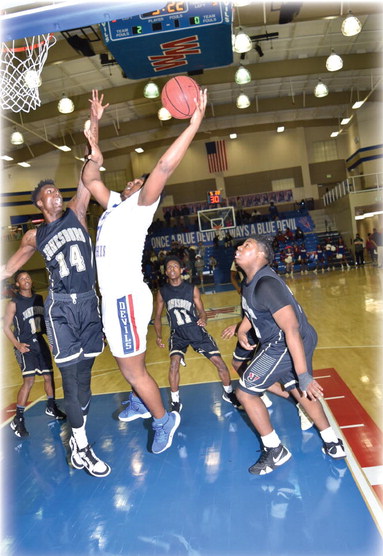 Blue Devils rely on the three to beat Jonesboro at home

WM School District Relegated to the deep end of Marcus Brown’s bench for most of the season, West Memphis guard Deon Williams is slowly gaining the trust of his head coach down the regular-season stretch.

With his team facing dire straits, Williams was summoned off the pines in the second quarter of Tuesday night’s game at Lehr Arena against Jonesboro and the junior responded by hitting some clutch three-pointers on the way to a 55-41 victory over the Hurricane.

However, with two wins over the Hurricane this season, the Blue Devils own the tie-breaker.

Williams was the first subject that Brown addressed in his postgame presser.

“Deon breathed some life into us,” said Brown. “We had hit a low, and Deon was very crucial for us tonight.”

By the 2:38 mark of the second quarter, the Blue Devils were staring at some troubling circumstances.

Their starting center, Mark Robinson, was ejected for an intentional flagrant foul.

Their starting point guard, Cavin Paige, sat out most of the first half after picking up two quick fouls.

And the Blue Devils finished the first quarter with zero team rebounds.

Enter Williams, a lefty-shooting mighty mite. His two drained three-pointers to end the first half accomplished two things for West Memphis: 1. It sliced Jonesboro’s lead to a much more manageable 24-21.

2. It gave the Blue Devils some momentum for the start of the second half.

“Big props to Deon,” Brown continued. “He’s been working on his shot and we’re super happy for him. I always say playing time at West Memphis is not given, it’s earned, and Deon has earned some playing time with the way he works in practice.”

Although Jonesboro bolted to early leads of 9-0 and 11-2, it was all West Memphis in the second half.

The hosts didn’t take their first lead until senior Terry Burgess, who scored 11 points, stole a ball and sprinted the length of the floor for a basket with 3:57 to play in the third quarter for a 30-28 Blue Devil cushion.

The second half was mostly about defense for the Blue Devils.

Showing zone for the first time all season, the Blue Devils put the clamps down on Joneboro’s shooters, limiting the Hurricane to a 5-for-20 effort from the floor for the second half.

“I just thought we played a much better second half all-around,” Brown stated.

“They hit a couple, but for the most part we got out on their shooters.”

A 40-34 West Memphis lead at the end of three quarters soon ballooned to 19 points (53-34) as Brown’s bunch scored the first 13 points of the fourth quarter and by game was put to bed.

But it didn’t look especially good for West Memphis after Paige picked up his second foul of the game not three minutes into it.

He sat out the rest of the half.

“It’s just a lot smoother operation when Big Daddy’s in there,” said Brown.

“As you could see in the second half we started rolling when he was playing.”

Junior Chris Moore had a somewhat quiet night, for him anyway, with 13 points and 11 rebounds while Williams poured in his career-high mark of 11 points. Immanuel Hoard and Paige, who added 3 assists, hit for 7 points apiece.

Jonesboro got 9 points from Shamari Milton and 8 from Marcedus Leech.

The Blue Devils hit the road Friday to play at Paragould.