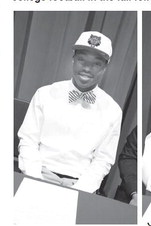 Community members, fellow Patriot athletes, school board members, and seniors were invited to Marion Performing Arts Center to witness their commitments to area colleges and universities: Patriots taking their talents to the collegic level were:

• Anthony Switzer, who will be playing for the Arkansas State University Red Wolves next season.

• Joyrion Chase, who signed to play for the Arkansas Tech University Wonder Boys.

• Timon Akins, who will be suiting up for the University of Arkansas at Pine Bluff as a member of the Golden Lions

• Kenta Jones, who will represent the Patriots in Arkadelphia playing for the Ouachita Baptist University Tigers in 2019.

By the Times Sports Staff