Greyhounds come back against North Arkansas 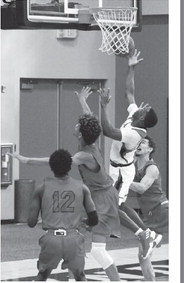 Greyhounds come back against North Arkansas

ASU Mid-South on a roll

asumidsouthsports.com The Greyhounds took their first lead on a Jalen Lynn three-pointer with 2:20 to go and hit 3-of-4 free throws in the last minute for an 80-75 Region 2 victory over North Arkansas Saturday at The Dog House.

North Arkansas (18-8) had won 11 of their last 12 games coming into the NJCAA Region 2 contest and led 41-35 at the half. Lynn, ASU Mid-South’s leading scorer, was held to just 5 points in the first frame and the Pioneers held him scoreless in the second half until a hard foul sent him to the line with 3:10 remaining in the game and the Greyhounds trailing 69-65. But the foul ignited both the team and Lynn, who knocked down both free throws and then scored the next 8 points on a midrange kiss off the glass and two three-pointers, all on consecutive possessions, giving the Greyhounds a 75-73 lead with 1:42 left to play.

The Greyhound defense then surrendered only two free throws the rest of the way as Zach Byrd found Christian White for a dunk in transition and Lynn and White hit 3-of-4 free throws down the stretch to seal the victory.

Lynn ended up scoring 12 of his game-high 17 points in the last 3:10, and Zach Byrd was an all-around contributor with 13 points, 6 rebounds and 7 assists before fouling out. Christian White came off the bench with 14 points and a game-high 9 rebounds, while Shaheed Halk (6 rebounds, 5 assists, 4 steals) and Kamari Marrs (4 rebounds) scored 8 points each.

The Greyhounds were hurt by 22 turnovers for the game but controlled the boards with a 48-31 advantage while holding the nation’s third-highest scoring team (101.0 points per game) to 75 points on 39.1% shooting from the field and 26.3% shooting from the threepoint line.

ASU Mid-South (16-6) played the first of eight games in 17 days to finish the season thanks to a rescheduled game at St. Louis Community College Park College Thursday and UA-Cossatot on Saturday.