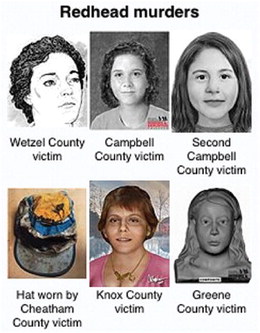 On Sept. 16, 1984, the body of Lisa Nichols, 28, was found in West Memphis. Nichols, who was not identified until June of 1985, had been missing for some time from West Virginia before being found along Interstate 40, a victim of strangulation.

Between 1978 and 1985, at least a half-dozen women were believed to be the victims of the “Bible Belt Strangler,” often referred to as “The Redhead Murders.”

In February 1983, the first victim of the Redhead Murders was found in Wetzel County, West Virginia.

Over the next few years, several more victims were found along interstates and highways in Tennessee and surrounding states. However, because victims' bodies were dispersed across multiple states and bodies were unidentified (Nichols was the only victim whose identity was ever confirmed), officials never confirmed connections between the murders, and they became separate cold cases.

In January 2018, Alex Campbell's spring sociology class at Elizabethton High School began investigating the cases and created an eight-page profile of the murderer. They will release this to the public at a press conference on May 15 at the school, about 60 miles from the where the nearest body was found.

Their hope is that by releasing the profile, the public will take interest and provide tips related to the cases. Media outlets and law enforcement from each county and state where a body was discovered are invited to the conference. The profile was the culmination of a semester of studying human behavior and correlations between the victims. Students identified several similarities between victims including gender (female), age (between 17-45), weight (under 145 pounds), and most prominently each victim's red hair. The class determined that six victims were ultimately connected to one killer. The profile identifies 21 characteristics of the killer like appearance, occupation, family background, and motives.

In addition, they developed a timeline of events leading up to the murders.

These resources will be available to the media, law enforcement and the public. Details from the profile have already aired on the Out of the Shadows podcast with Shane Waters, who is currently conducting his own interviews of witnesses and related persons.

“These are unsolved murders in which only one victim has been identified,” said Bekah Price, Public Relations Coordinator for Elizabethton City Schools.

More information on the murders is available in the Out of the Shadows Podcast (www.blogtalkradio.com/o utoftheshadows), and the first public reading of the murderer profile takes place in the fourth episode. The host/producer will be in attendance at the press conference.

Man who dumped stolen car in Marion guilty of murder

Rescue sanctuary for animals with neurological disorders celebrates one year in West Memphis...

SROs on the Scene

At Saturday’s Back to School Bash, a few of West Memphis’s school resource officers were...

Do your best and have fun

You will be most successful if you pursue a career that you are able to do. Some jobs do not...