Bray to be inducted to Arkansas coach’s Hall of Fame 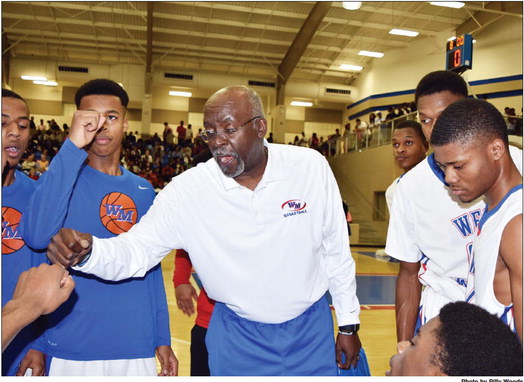 Bray to be inducted to Arkansas coach’s Hall of Fame

WM School District How Larry Bray ended up coaching basketball in West Memphis is complicated, to say the least.

As a 6-foot-3 shooting guard from LaGrange, Ga., with all the moves and a dead-eye jumper with range, Bray had his shot at professional basketball. While he wasn't drafted by either the National Basketball Association or the American Basketball Association, Bray had tryouts with the ABA's Memphis Tams and the NBA's Portland Trail Blazers, New Orleans Jazz and Baltimore Bullets.

After working with Life of Georgia Insurance company and in the midst of a tour playing ball in South America, his old college coach at Henderson State University, Don Dyer, called Bray.

'Coach, I'm getting sick of playing ball in South America,' Bray told Dyer, who got wind of a coaching position open in West Memphis.

'You still have an interest in coaching, Larry?' Dyer asked.

'When do I start?' Bray retorted.

Just like that, Bray was hired by the West Memphis School District to be the head basketball coach at East Junior High, succeeding Alvin Futrell.

And that was the start of what is now being recognized as a Hall of Fame coaching career at West Memphis.

Bray will be inducted into the Arkansas Coaches Association Hall of Fame on July 14 in Hot Springs.

'I have thought about it little, but I still don't think it has sunk in yet,' Bray said of his induction. 'It's still a little hard to believe. You do something like coaching when you're young and you never think of it ending up in the Hall of Fame. But it's just something that happened, and I'm proud that it happened.'

Bray resigned as head coach of the West Memphis Blue Devils a few weeks ago after leading the program for 32 years. Along the way he compiled a record of over 500 wins, nine conference championships, four state championships and three national rankings.

'You know, you win a few state championships and you begin to think about what's the next level for you as a coach,' Bray added. 'And I think (the Hall of Fame induction) is that next step. This is the ultimate thing you can receive. I think about all the other people who I've seen nominated for the Hall of Fame and just to be lumped into that same group is a big honor for me.'

Bray began his West Memphis odyssey in the 1974-75 school year at East. He coached the Red Imps for five years and his list of standout players is impressive. He coached Michael Cage, Tim Harrell, Mike McFerrin, Stanley Andrews, Nakita Robertson and Johnny Oliver, just to name a few.

All of those players helped the Blue Devil basketball program to two national rankings, two state championships and a record 60 consecutive wins.

And they did it with Bray as Blue Devil assistant coach to Bill Terwilliger, who moved Bray to the high school in the 1979-80 season.

After Terwilliger retired as head coach following the 1983-84 season, Bray was hired to replace him.

'West Memphis has probably been better to me than I've been to West Memphis,' Bray stated. 'When I came here I wasn't expecting to stay long. I wanted to come here for about five years, get some coaching experience and then move back home.

'But after a few years, I really fell in love with what we were doing in West Memphis. So, I asked myself, 'Why look for anything else? This is great.'' Most notable about Bray is his easy-going, engaging personality and the ability to not take himself so seriously.

When all his records at West Memphis, including all-time winningest coach and most state titles, Bray's response was, 'Well, I've been here long enough, so i guess I should be.'

'I've been blessed to have a lot of great assistant coaches working with me and a lot of great players,' Bray added. 'The players, for the most part, bought into what we were trying to do here, as far as success. Without them all this would not be possible.'

Bray's coaching philosophy is simple. 'The first thing you have to do to play for me is to do things the right way,' Bray explained. 'You have to sell that idea to the kids. In that process you're going to lose some kids because they don't want to buy in. First of all, I didn't want any kids to play for me if they didn't love to play basketball. I wanted kids when I opened the door to the gym I eventually had to run them out of there. Once you get those type kids in, you teach them values, discipline and how to play. Once that happens it bleeds over into the classroom because they have that discipline. You're trying to get more out of the kids than just winning the game.'