Patriots defeat Jonesboro to end summer on a winning note 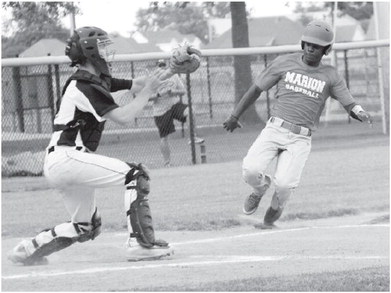 Patriots defeat Jonesboro to end summer on a winning note

In Marion’s last baseball summer- league game, the Patriots ran past their counterparts from Jonesboro with a nine- run victory

The Marion Patriots walked off of John Robbins Field for the last time this summer victorious with an emphatic 10-1 victory over Jonesboro High School’s summer-league team, the Jonesboro Jackals.

Marion wasted no time jumping on top of the Jackals, driving in four runs in the bottom of the first inning for a 4-0 lead. Patriots head coach Daniel Kelley expressed his pleasure with the energy his team brought out of the gate into their final summer- league contest.

Will Griffen and Tony Rudd represented Marion’s first two baserunners in the opening frame, each Patriot being plated by a ball put in play by Braeden Wolford which caused a Jonesboro error. Peyton Lawhon then picked up Wolford with a single to right field. Patriot’s starting pitcher Alex O’Brien then followed suit, helping his own cause with another single to right field to score Lawhon. Kelley says Marion’s impressive plate performance is due to sharp eyes at bat.

The Patriots offensive onslaught continued in the bottom of the third inning as Rudd was struck by a pitch and, after a single by Wolford, was driven in on a fielder’s choice put in play by Lawhon. Wolford then scored after a Jackals pastball to give Marion a 6-1 advantage.

However, the Patriots weren’t done yet, adding four more runs in the bottom of the fourth frame, highlighted by Marion centerfielder Kenta Jones stealing home to increase the Patriot lead to 8-1. Kelley says he allowed the speedy Jones to swipe home plate in hopes of hitting the 10run mercy-rule mark.

“The opportunity presented itself,” Kelley said. “Kenta has good speed. Their pitcher was in the windup and not paying any attention. I wanted to try to finish the game in five (innings) with the run rule. I was trying to get every run I could… And when Kenta Jones is at his best, there ain’t nobody better.”

Limiting the Jackals to a single run, O’Brien pitched a complete seven-inning game for Marion in a dominating performance, according to Kelley.

“Alex was great,” Kelley said. “He’s been that way his past few outings. He’s done a fantastic job…. He threw a lot of strikes. He was down in the zone. He kept them off balance with his breaking ball. He got a lot of ground ball and fly ball outs. And, he struck out a fair amount. He had an all-around real good outing. He went the full seven. His pitch-count was down. He was pitching to contact and doing a real good job.”

O’Brien struck out eight Jonesboro batters on the night while walking three and surrendering three this (all coming in the third inning) which resulted in the one aforementioned run.

The Patriots now hang up their cleats until next season comes around. Though Kelley will not coach the 2018 Patriots due to former Nettleton Raiders coach Pete Prater being named the new Marion baseball head coach, he feels very comfortable about the team he is leaving behind and the summer they had.

“I thought we did pretty good,” Kelley said. “We had to get some things going. We had to improve our baseball etiquette as a team. You got to communicate with each other on and off the field, communicate from the dugout and give positive support. The players got to talk on the field as far as communicating fly ball outs. We need to run on and off the field every single play. Just some little things that we needed to clean up as a baseball team to make sure that we carry the momentum of this past season into next year.”

Following a season that saw the Patriots make it to the Arkansas 6A State Baseball Quarterfinals where Marion fell to the top-seeded Greenwood Bulldogs 4-3 in extra innings, the Patriots seem to be trending in the right direction going into next season. The energy from last season’s playoff run coupled with Thursday’s victory over their 6A-East rivals in Jonesboro could cause for a hot start to next season as a core group of players young continue to mature on and off the field. “The last baseball game they played going into next spring, they won,” Kelley said. “And, they won it by nine runs against Jonesboro. So, that’ll make you feel good.”