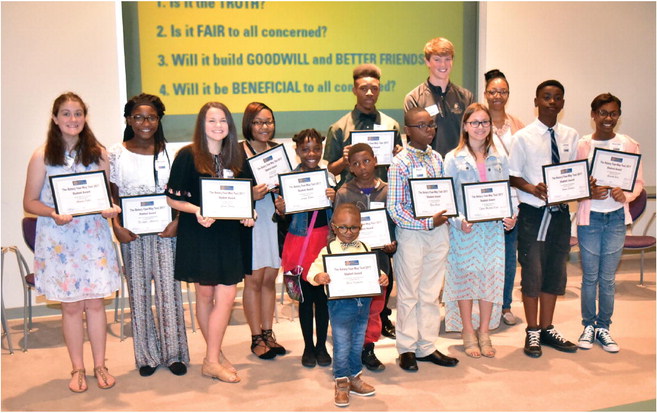 One student from each West Memphis school was honored for emodying and reflecting the ethical elements of the Rotary 4-Way Test.

• James Perkins, sixthgrader at Richland Elementary. Perkins was selected because he possesses a heartfelt desire to give to others and has demonstrated maturity beyond his years.

Fraley is committed to the enhancement of her school, participating in many school projects.

• Abigail Pahls, sixth-grader at St. Michael's Catholic School. Pahls was selected because of her thoughtfulness, generosity and kindhearted spirit.

• Dylan Michelle Dodd, sixth-grader at Bragg Elementary. Dodd was selected because she shows empathy toward others and is especially attentive to new students who come to Bragg.

• Bryce Waller, 11th-grader at West Memphis Christian School. Waller is great at problem solving and his motto is to stay calm in every situation.

• Atesia Gordon, ninthgrader at East Junior High. As a student office worker at East, Alesia understands the importance of first impressions and greets everyone with a smile and positive attitude.

• Laniya Brown, fourthgrader at Wonder Elementary. Brown received the STAR student award at her school and was the unanimous choice from the committee.

• Raven Hinton, senior at the Academies of West Memphis. Hinton is an excellent student, but more than that she goes above and beyond in seeking ways to serve others.

Jones was selected because she has distinguished herself as bright, inquisitive and energetic along with being a phenomenal team player and group worker.

Positive and enthusiastic, Ganus is an ambassador for his school in so many ways and welcomes guests to the school as well as building friendships with new students.

Knowlton walks through the doors each day with a smile on his face and a story to share.

Hollins is called the 'turnaround kid' as he began the year with a less than happy attitude, but the staff at Weaver say his outlook is like night and day from the beginning of school to the present.