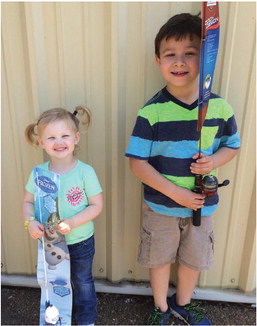 Congratulations to Martin and Tiffany Shea of Horseshoe Lake. Martin Walker Shea was born on April 4, at 11:15 p.m. He weighed 8 pounds and 13 ounces, and was 20 inches long. Martin Walker has an older brother, Peyton and older sister, Bailey. Proud grandparents from Horseshoe Lake are Greg and Rachele Shea and from Texarkana, Beverly Smith.

The Town of Horseshoe Lake sponsored their annual Easter Egg Hunt, on April 1. There were over 40 children in attendance, plus adults and family who came out to watch. The group 5 and up hunted at the Horseshoe Lake Library, while the 4 and under hunted inside the Park. Then everyone met back at City Hall to watch the Easter Bunny arrive on the Fire Truck. The Easter Bunny was available for photos and he gave out candy, kites and bubbles. Afterwards the kids enjoyed playing and having hot dogs, chips, cupcakes and drinks at the Park. This year they had two fishing poles to give away for finding the most eggs. Christian Rios won in the 5-and-up category and Morgan Pouncey won in the 4-andunder age group. Marsha Siders wishes to express thanks to The Town, Horseshoe Lake Library, Easter Bunny and transporters of the bunny and all the parents/grandparents who brought their kids and helped. The community wishes to express thanks to Marsha Siders for being the coordinator of this event each year.

Water Operator, Rick Scarbrough was not available for the monthly meeting, since he was in class. Report from Fire Chief Thomen was they were working on the training facility on Trout Rd. and he wanted to thank Deanna McDermott for her taking care of the paperwork for FEMA. Code Enforcement Officer, Vince McDermott, reported that the grass was becoming a problem and letters & verbal contact were being made. Under new business only one bid packet was turned in for grass cutting and was opened. Council agreed to accept the bid packet and to changing the cuttings from every 15 days to every 10 days, at the fast- growing areas. There was also discussion on getting the bid packets out for parking lot. A date has been set up for the annual clean-up in the Town of Horseshoe Lake, dumpsters will be available at City Hall May 5, 6, and 7. Any Senior Citizens who need help getting their stuff to the dumpsters should contact Deanna McDermott at City Hall at 870-3393104. Council agreed to acquire an extra dumpster, but would like to remind everyone NO tires or batteries. Alderman McDermott volunteered to pay the water connection fee for the Church, when they are ready to move into the old store, on Lake Estates Dr. Nan Lambert spoke to the council about the possibility of Eighth Street Mission coming down here periodically to pick-up clothes, furniture and other items they accept. There was discussion on possibilities of coming quarterly, having a location to leave a sign- up sheet for pick-ups once a date had been determined. The Town thought to go in conjunction with the Clean-up May 5th this could be a good time for Eighth Street Mission to make their first trip. No definite plans have been set up yet.