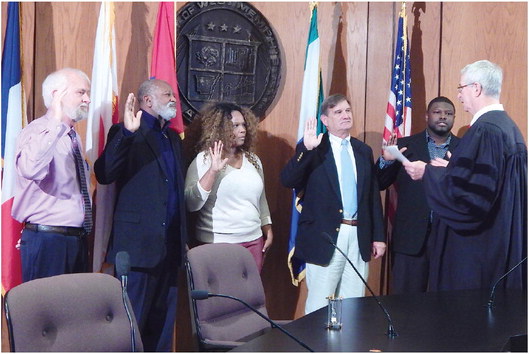 Officials sworn in with special ceremonies

Councilors for each of the City of West Memphis Wards second positions took their oath of office Tuesday morning at city hall. District Judge Fred Thorne swore the five representatives into office to start the New Year.

Wayne Croom took his first oath of office after winning election in November. Croom successfully campaigned for the seat vacated by Taz Tyrone. Tyrone stepped aside to pursue business interests.

The four other candidates won reelection and kept their old seats. The newly sworn Councilors caste their vision for the new year in 2017.

Croom took his seat for Ward 3 for the first time opposite Councilor Ramona Taylor. He expressed excitement and expectations that went beyond an eye opening rookie year on the city’s governing board.

“I am excited, and I hope the Ward 3 residents and citizens of the city are excited I’m on the board,” said Croom. “I’m looking forward to improving the economic conditions in West Memphis, hopefully attracting new businesses and opening up opportunities for individuals to have better jobs.”

Economic development and city beautification were stressed by most of the newly sworn city legislators too. Outdated ordinances need to be swept out according to Tracy Catt of Ward 1.

“First priority is to clean up our old ordinances,” said Catt. “The city attorney is working on that. We have a lot of old things that need to be taken off the books, and some need rewritten.”

As for business development Catt caste his eyes on existing enterprises.

Willis Mondy echoed the sentiment from the other end of the Gateway City.

The Ward 5 representative said the east end needs cleaned up and businesses need opened up to capitalize on the Big River Crossing traffic.

We got the Big River walk in and people need something to do when they get over here. We have Pancho’s, which is terrific, but then its really blight after that. We need to try to do concerts on that end, get the people over here, and brighten it up.”

Marco McClendon kept his Ward 4 seat for another term. The Councilor wants a clean, safe, and prosperous City in the new year.

“We need to clean up the City of West Memphis, make sure our city is presentable from the east to the west end,” said Mc-Clendon. “I’m looking forward to working with the administration to establish more economic development. Keeping crime down and making West Memphis a safer community is a must.”

Melanie Hutchinson gave her view from Ward 2 and nodded toward the youth and children of the Wonder City.

“It’s all about the kids for me,” said Hutchinson.

“Looking forward to great changes already n the works for children. New types of programs to council gangs and new kinds of possibilities for children is what it’s all about. I’ve got this one more term to do it