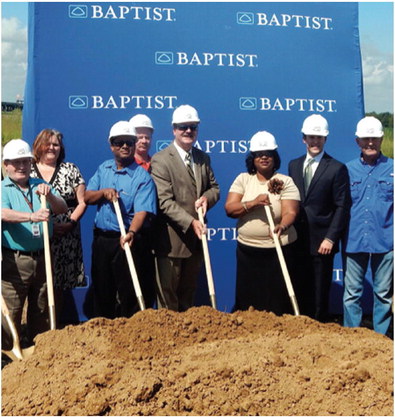 What made headlines in the year that was?

ralphhardin@gmail.com The Year of Our Lord Two Thousand and Sixteen is in the books. For residents of Crittenden County, there was plenty going on that garnered a good share of ink in the Times.

Perhaps the biggest story of the year, and one that is likely to have the greatest impact going forward was the announcement of a new hospital for the county.

After a false start or two with deals that failed to come to fruition, county officials were able to negotiate an agreement with Baptist Memorial Health Care to bring a brand-new Baptist Hospital to Crittenden County. The county has been without a major health care facility since August 2014, when the now-defunct Crittenden Regional Hospital closed its doors and declared bankruptcy after more than 60 years in business. The controversial closure resulted in a loss of hundreds of jobs, a messy slate of elections for a tax to “save our hospital” that ultimately failed, and a class-action lawsuit over employee insurance funds.

The groundwork for the Baptist-Crittenden deal was actually laid in December of 2015 after another deal, an agreement with Ameris Health Systems that was never fully realized, fell apart. Ameris was expected to take up residence in the old CRH building, but the company got cold feet when its expectations of how it would be able to spend $30 million in tax revenue were not in line with the county’s plan. In early 2016, the Baptist deal was officially inked, with a February vote approving a one-cent five-year tax to fund the brand-new facility, which will be located in West Memphis, along the 7th Street/I-40 & I-55 frontage. In May, Brian Welton was named CEO and administrator of the $25 million hospital. A groundbreaking ceremony was held in September, with a projected mid-2018 opening date in mind.

The county did eventually find a tenant for the old hospital building, which had become a revenuesucking liability for taxpayers, to the tune of nearly $1 million. The Arkansas Department of Community Corrections signed a deal to bring its women’s correctional and rehabilitation center from Pine Bluff to West Memphis. The center, which houses about 200 nonviolent offenders, mostly with drug-related charges, brought dozens of new families and new jobs to the community. There was some controversy surrounding the deal, with many contending that bringing a “women’s prison,” even a minimum security center, would be a detriment to the community, but the deal was struck and by mid-May, the transition from hospital to community corrections center was complete. The neighboring Schoettle Medical Center was also repurposed, with DeltaARTS taking up residency in the newly-renamed Glenn Schoettle Arts Education Center this past fall.

Perhaps the next biggest local story centered around the Big River Crossing.

More than two years in the making, work was finally completed on the bicycle and pedestrian path repurposing the Harahan Bridge as a major attraction that officials on both sides of the river hope to develop for tourism. The bridge is part of the Big River Trail

that connects downtown Memphis and West Memphis, with plans for parks, green space, seasonal attractions and more to grow the trail into a big draw for the area.

Another story that dominated the front page in 2016 — in 2015 as well — was the Saga of Carolyn Jones. The Earle mayor’s tumultuous term was cut short when voters, having sat through two years of conflict, strife, mismanagement, lawsuits, questionable spending and a slate of problems, pushed a recall initiative through the many hurdles it required, and in November, voted to remove Jones from office. Two weeks later, following the certification of the vote results, Jones handed over the keys to the city. A special election to fill the vacancy will be held later this year.

Yet another holdover from 2015, the ever-looming threat of the Tennessee Department of Transportation’s plans to close the I55 bridge for nine months to a year for a construction project remained a highlevel story in 2016. For now, the news in May that plans have been put on hold is the latest update. Officials on this side of the river have steadfastly opposed the closure.

Marion is ending 2016 on a high note. Plans for progress are in place, with Angelo’s Grove and the downtown area looking to grow. Turrell had reason to celebrate, with a new Library opening, and a groundbreaking for a new city park. West Memphis’ industrial district will feel the benefits of a multimillion- dollar grant for its port and rail systems.

The West Memphis schools are currently in the midst of major upgrades, with a new Bragg Elementary under construction.

There’s been growth at ASU Mid-South as well, with the opening of a new Aviation Center.