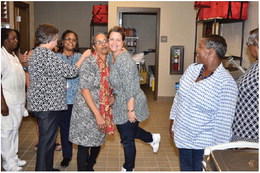 Faulk Elementary unveiled its new cafeteria to the public recently. The structure includes twice the space as the old cafeteria along with a stage, new sound system and stateof- the-art kitchen appliances.

What better way to try out the new cafeteria than with a little snack?

Guests were given the grand tour.

West Memphis Superintendent Jon Collins (center) gets the lowdown about the new caff from one of the staff.